The Death Master is a mobile suit of the Death Army. It appears in Mobile Fighter G Gundam.

The Death Master is a basic Death Army unit outfitted with some of the GF13-001NHII Master Gundam's armor and weapons. They are piloted by DG cell reanimated human corpses. Just like the Master Gundam the Death Master uses a Master Cloth as its main weapon in combat.

After the JDG-00X Devil Gundam escaped from Tokyo, Domon Kasshu went to the Guyana Highlands to train and improve his martial arts skills to fight his former master Master Asia. During his search for Master Asia, Domon spotted Master Gundam outside of Tokyo. Unknown to Domon, what he was seeing was an illusion and part of Master Asia's trap. Three Death Masters battled the Shining Gundam and pinned him down. These units were being controlled by Master Asia from another loction. 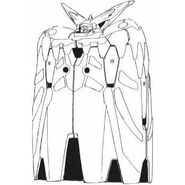