The Death Birdie is a mobile suit that appears in the Mobile Fighter G Gundam anime series.

The Death Birdie is a variant of the Death Army mobile suit attached to a winged harness for aerial attacks. It attacks with its claw arm beam cannons and can seperate from the harness to divebomb an enemy.

Each of the harness's claws mount a beam cannon within them, allowing the Death Birdie to make strafing attacks.

While Domon Kasshu was training in the Guyana Highlands, he was ambushed by Master Asia and the spawns of the JDG-00X Devil Gundam, consisting of the Death Army, Death Birdie and Death Navy mobile suits.

Converting into a Death Army unit 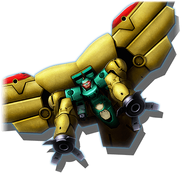