Daryl Dodge (ダリル・ダッジ, Dariru Dajji?) is a fictional character in Mobile Suit Gundam 00. Daryl is a Union Flag pilot with the rank of Master Sergeant. Daryl is assigned to the Anti-Gundam Investigative Taskforce (Over Flags) at Graham Aker's request, and helps him in his pursuit of the Gundams.

He is a loyal and trustworthy man outside of battle. However, unlike his optimistic comrade Howard, Daryl is shown to be more realistic and skeptical of certain things, such as whether or not a Flag could truly defeat a Gundam despite the upgrades. However, he still holds his pride as a Union Flag fighter in his last moments.

Daryl doesn't tolerate anyone mocking Graham and his honor, and threatened physical violence upon them on two separate occasions but was stopped from carrying it out such as Joshua Edwards who mockingly brought up Graham's accidental murder of a superior officer in a training accident and Patrick Colasour who insensitively assumed Graham chickened out from taking part of the United Nations Forces' assault on Celestial Being.

While not as skilled a pilot as Howard Mason, he has plenty of fighting spirit. He was chosen to be part of the Over Flags squadron, and his skill is acknowledged by Graham Aker.

A Union soldier with the rank of Master Sergeant. Another of the first Flag Fighters assigned to the Anti-Gundam Investigative Taskforce "Over Flags" under Graham Aker. Unlike Graham and Howard, he doesn't share their faith that a Flag can beat the Gundams. He was present during the Gundams intervention in Taribia. He participated in the intervention of Azadistan and in Operation G.

He witnessed the death of Howard Mason at the hands of Michael Trinity in GNW-002 Gundam Throne Zwei. He along with Graham Aker vowed to destroy the Gundams.

Daryl is soon transferred to the Union's GN-X squad, where he meets Patrick Colasour and tells him not to speak ill of Graham. During "Operation Fallen Angels", he launched a suicidal attack on Gundam Dynames in order to avenge Howard Mason's death. Despite taking heavy damage from the Dynames' missiles, Daryl remained defiant to the end, his last words being "I am proud to be a Union Flag Fighter!"

By chance, Daryl's charge brought his GN-X into Lockon's blind spot, allowing his suicide attack to destroy one of Dynames' arms. This incident also led to Lockon's eventual death at the hands of Ali al-Saachez, who used his newfound knowledge of his enemy's blind spot to critically damage Dynames and injure Lockon. 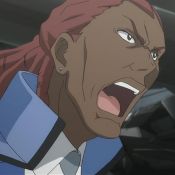