Danton Hyleg was a mobile suit test pilot in charge of data collection in the Principality of Zeon and Neo Zeon. Although an exceptional pilot, he remained a test pilot, and was never deployed in combat due to being unwilling to take a life.

After the end of the Second Neo Zeon War, he hid his identity and moved to Side 6 with Arlette Almage.

Following the events of Laplace's Box, in late U.C. 0096, Danton and Arlette Almage are among the investigative team accompanying the Earth Federation's Mastema special forces team. On a mission to investigate Axis, which is drifting in the Earth Sphere, the team is attacked by the RX-78AN-01 Gundam AN-01 "Tristan" and Birnam forces. To fight back, Danton pilots the abandoned mobile suits of Axis, including a AMX-011S Zaku III Custom and a AMX-104 R-Jarja. 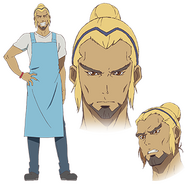 Retrieved from "https://gundam.fandom.com/wiki/Danton_Hyleg?oldid=436646"
Community content is available under CC-BY-SA unless otherwise noted.