The Damocles is an airship that appears in the TV anime Mobile Fighter G Gundam.

This is a large airship used by Maria Louise, the daughter of the Neo-French head of state, to visit various countries. The special shape of the airship, with its nose split in two, is a unique Neo-French design that fuses elegance and radicalism. The side of the hull is dyed in the colors of the tricolor flag, reflecting the pride of Neo-France. The cockpit and the habitation block are installed in a way that they hang from the balloon.

In this airship, Maria Louise followed George de Sand as he traveled from place to place. 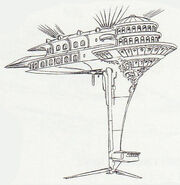 The Damocles in flight

Maria Louise on the observation deck
Community content is available under CC-BY-SA unless otherwise noted.
Advertisement