A gigantic Gundam held deep within the Tenshi Castle. Not essentially alive, it has a Mobile Trace cockpit which enables it to mimic the move of its pilot. Kibaomaru sought Genkimaru so that he may enter it with his warping abilities and use it to lay siege to his enemy, ending his war with Britainmaru. After number of delays Genikmaru made, he finally opened a portal directly into Daishinshou. Kibaomaru brought Genkimaru into the giant Gundam, suspecting that Daishinshou can copy the abilities of those driving him, enabling him to get it out of Tenshi Castle with Genkimaru's warping ability. But in a struggle, Genki becomes the pilot instead, expelling Kibaomaru. Genki subsequently used it to lay siege to Kibaomaru's forces in the final battle of the Ark civil war. After departing it, Daishinshou mysteriously transformed into the Dai-Shogun's armor and boat and flew away. 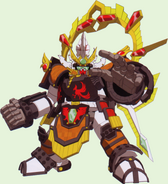 Add a photo to this gallery
Retrieved from "https://gundam.fandom.com/wiki/Daishinshou?oldid=422193"
Community content is available under CC-BY-SA unless otherwise noted.