In description, Daiki is a Happy-Go-Lucky character and somewhat very friendly to his friends and the people he meets. He also shares a bit of serious side when his father is involved, after he goes missing 6 years ago. He is usually not good on studying but also very robust when it come to fighting the Vagan.

Although being a young kid, Daiki possesses impressive X-Rounder potential as he can synchronize better with the AGE-1, allowing him to have exceptional close combat skills when piloting the Gundam.

Daiki usually met Flit once after he obtains his Gundam. To his shock that it has the same design as the AGE-1 Normal. Also being both X-Rounders, they somehow have different beliefs about the Vagan. 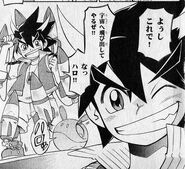