The DT-6800A Daughtress is a mass production general-purpose mobile suit. The unit is featured in the series After War Gundam X.

The Daughtress served as the UNE's mainstay mobile suit and has several variants to accommodate for various situations.

The Daughtress's primary weapon is its 90mm machine gun, which fires solid rounds at a rapid rate. For close quarters combat, the Daughtress is armed with a beam saber.

The beam saber is the standard close-combat weapon for a lot of mobile suits. It generates a blade-shaped beam to melt and cut through enemy's armor. The Daughtress's beam saber is stored on the suit's main body.

The bazooka is a optional weapon of the Daughtress which can be equipped when heavier fire power is required. This bazooka functions like a standard bazooka and fires physical rounds.

A shield can be optionally equipped on the Daughtress for basic defense against physical weapons. Furthermore, a shield can be adapted to defend against beam weapons through the use of anti-beam coating.

The DT-6800A Daughtress is a mass-produced general purpose mobile suit built by the United Nations Earth (UNE) sometime prior to the 7th Space War. This mobile suit served as the mainstay unit of the UNE throughout the war. However, the Daughtress probably started to be phased out of use during the final stages of the war due to the deployment of the more advanced Gundam-series mobile suits.

After the cataclysmic war, a number of Daughtress mobile suits survived and found their way in to the hands of various factions. Some of these Daughtresses were claimed by Vultures. Many of these acquired Daughtresses were customized in various ways by different factions and people.

Even though the Daughtress was an outdated mobile suit in A.W. 0015, the New United Nations Earth still operated a large number of these mobile suits in its campaigns to re-unify the world. The Daughtress started to be phased out of use by the New UNE when the more advanced NRX-009 Balient was introduced. Despite the deployment of the more advanced Balient and NRX-018-2 Daughtress Neo, many Daughtresses were still deployed in the 8th Space War (presumably due to the New UNE's lack of resources). 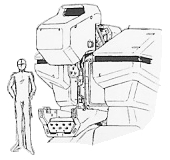 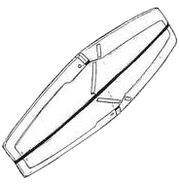 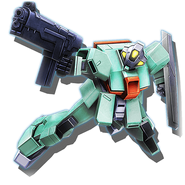 Alternate concept of an upgraded Daughtress based on GX. Designed by Junya Ishigaki

Retrieved from "https://gundam.fandom.com/wiki/DT-6800A_Daughtress?oldid=458952"
Community content is available under CC-BY-SA unless otherwise noted.