The D-50C Loto is a special operations transformable mobile suit featured in Mobile Suit Gundam Unicorn. The unit is piloted by Daguza Mackle and Conroy Haagensen.

The DC-50C Loto is a transformable mobile suit used by Earth Federation's special forces, the ECOAS, and typically operates in pairs. It is developed by the Strategic Naval Research Institute (SNRI) to meet the following three demands from ECOAS: a small body size to ensure stealthiness/secrecy, the ability to function as a troop carrier and lastly, high mobility for swift operational deployment. Loto's operating data was later used by SNRI for the development of future miniaturized mobile suits.

At around 12.2 meters, the Loto's small size is made possible due to SNRI successfully minaturizing the mobile suit reactor. Although this reactor's output is much lower than other contemporary mobile suit reactors, it is sufficient for powering the Loto. Another factor for the Loto's size is the adjustment of the clearance for each part of the mobile suit in the scale of millimeters to remove dead space. To serve as a troop carrier, the Loto has a compartment in its back for carrying up to eight soldiers and they exit via a foldable loading ramp in the lower back.

To keep the Loto highly mobile, its thrust-to-weight ratio is increased; this is achieved through keeping the Loto's weight down via equipping it with the bare minimum amount of armor needed for protection against ballistics. The Loto's ability to transform from a mobile suit mode to tank mode facilitates rapid deployment of the carried soldiers and also reduces its height to around 3-4 meters. Furthermore, the treads of the tank mode also help the Loto to transverse over uneven terrain much more easily.

The Loto is operated by three crew members: a pilot and a communications officer in the upper torso, and a vehicle commander in the lower torso. When required, an additional crew member can be seated in the pelvis for mission-specific assistance/tasks. The four crew members can enter via two cockpit hatches, one at the front of the torso and another at the front of the pelvis. The Loto can also serve as a field headquarters as well as a mobile communication vehicle as it is equipped with various state-of-the-art sensors and communications devices including inertial navigation system.

The Loto's fixed armaments include two beam burners and a pair of arm-mounted missile containers. It does not possess standard mobile suit manipulators, but can mount a variety of weapons on its shoulders for greater versatility. These optional weapons include a pair of long cannons, a mega machine cannon, or a small machine cannon. Thus, although not designed for direct combat, the Loto performs admirably as a mid-to-long range support unit.

The Loto is equipped with two beam burners, one is set in the "palm" of each sub-arm mounted on the missile containers. The sub-arms are simplistic robotic arms with three claws for grasping and can be easily bent and destroyed by other mobile suits due to a lack of armor. Unlike a beam saber, the beam burner blows high-energy minovsky particles (which take on the form of a small blue blade) to melt and cut the target. It is mainly used for cutting through walls for infiltration purposes, but can also be used for MS combat.

In place of standard manipulator arms, the Loto possesses two missile containers. Each container is divided into four sections and can carry a total of 12 small missiles (3 per section) or 4 medium missiles (1 per section).

The Loto can optionally mount a pair of long cannons on each shoulder's hardpoints, allowing it to function as long-range support mobile suit. The armor piercing rounds fired from these 200mm cannons can penetrate the armor of tanks, MS, etc. The cannons can be fired separately or in tandem and can elevate or depress for a wider angle of fire.

The Loto can optionally mount a four-barrel machine cannon on its right shoulder. The weapon is specialized for anti-air purposes and has high accuracy thanks to the precision, anti-air targeting system installed in the barrel. When required, the cannon can also be used against mobile suits or as an anti-personal weapon.

The Loto can be optionally equipped with a right shoulder-mounted machine cannon, which rapid fires 25mm live rounds. It is mainly used against armored vehicles or as an anti-personal weapon.

A searchlight can be mounted on the left shoulder.

Two Lotos were dispatched during UC 0096, each with their own small commando troop, to infiltrate the space colony Industrial 7. Their mission was to intercept Neo Zeon remnants, the Sleeves. One of the units tried to ambush the Sleeves' NZ-666 Kshatriya, but was quickly destroyed. The fate of the other unit is unknown.

Four Lotos were dispatched to the asteroid Palau for the operation of rescuing Banagher Links and retrieving the RX-0 Unicorn Gundam. They entered the asteroid's airspace and landed on its surface by hiding in dummy asteroids. Each Loto carried ECOAS soldiers equipped with explosives that were planted around Palau. After the SCVA-76 Nahel Argama fired its hyper mega particle cannon at Palau's military district, one Loto piloted by Daguza Mackle moved to the 14th space gate to pick up Banagher. The other three took up positions to act as mobile turrets, firing on the Sleeves' deployed mobile suits, catching them in a crossfire with the Nahel Argama's approaching mobile suit team. During the battle, the three Lotos destroyed numerous enemy mobile suits before the two equipped with long cannons were quickly destroyed by Full Frontal and Angelo Sauper.

During the investigation of the Unicorn Gundam, it was suspected that one of the seals on the Laplace's Box would be broken if the Unicorn Gundam was present inside the remains of the Laplace colony as the colony passed over a specific set of coordinates. The Nahel Argama's remaining two Lotos were deployed as part of the escort force. When the Sleeves attacked, orders were given to retreat, with the Lotos being needed to act as turrets to protect the ship. However, because the Lotos were at Laplace and required the assistance of another mobile suit to return to the ship, the retreat was delayed. One of these units was later destroyed by a missile barrage from a AMX-102 Zssa.

During the early half of the second universal century, the Earth Federation came to a period of peace it had not known since the first half of the first universal century. Because of that peace, there was no need for a stealth/infiltration mobile suit and the Loto was retired. At this time, Anaheim Electronics created the F-50D Guntank, a new small scale transforming artillery mobile suit based on the Loto. However, unlike the Loto, the F-50D Guntank was considered a failure and never made it past the prototype stage. It is unknown how many F-50D prototypes were manufactured, however, at least one was auctioned off and purchased by a civilian collector.

A Loto painted in Rainer Cziommer's custom color scheme was used by him in the Penultimate match of the preliminaries of the 7th Gunpla Battle World Championship. Already eliminated in the preliminaries, he tried to use his Loto to spoil Ricardo Fellini's victory in the race and ruin his chances to advance. Unfortunately for him, the Fenice's Buster Rifle made short work of his ambitions. 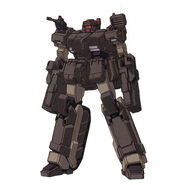 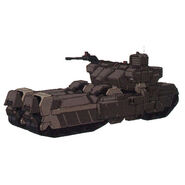 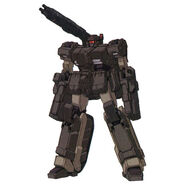 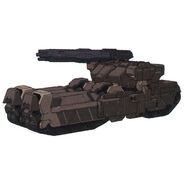 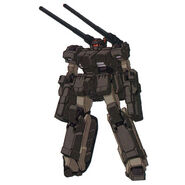 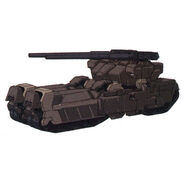 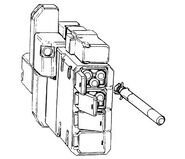 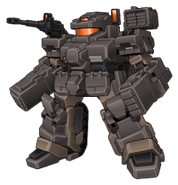