The Cyclops Team was a special forces unit under Principality of Zeon's Mobile Assault Force active during the One Year War.

The "Cyclops Team" was the nickname for a Zeon special operations unit consisting of around twelve members, all of which were trained in a variety of skills, including mobile suit piloting and espionage, and able to adapt to a wide variety of situations.[1]

In March, U.C. 0079, the Cyclops Team departed from Granada with the 1st Ground Mobile Division and participated in the first landing operation, making landfall at Europe. They acted as vanguard to the main force, disrupting communications, capturing bridges, and throwing the Earth Federation Forces into chaos. However, due to the harshness of their missions, the rate of attrition was high.[1]

By December, U.C. 0079, the team was down to only four members: Steiner Hardy, the team leader; Mikhail Kaminsky, the de facto second-in-command; Andy Strauss, vehicle specialist; and Gabriel Ramirez Garcia, firearms and explosives expert.[1] On December 9th, under the order of Colonel Killing, the Cyclops Team launched an attack on the Federation's Antarctic Base in an attempt to destroy the shuttle carrying the RX-78NT-1 Gundam "Alex". While the attack was initially successful, they were unable to destroy the shuttle in time, and Strauss was killed in battle.[2]

After the failure of the mission, the team was recalled to Granada, where Killing informed them that the shuttle dropped off its cargo in the Ribo colony of the neutral Side 6 and assigned rookie pilot Bernard Wiseman to the team to replace Strauss. The team was given a new mission: to infiltrate the Ribo colony and either capture or destroy the Gundam. The codename of this mission was Operation Rubicon.[3]

On December 15th, Wiseman infiltrated the colony in a civilian shuttle carrying the disassembled MS-18E Kämpfer and rendezvoused with the rest of the team.[3] With the help of a local civilian boy, Alfred Izuruha, Wiseman was able to locate the secret Federation base where the Gundam was being tested. However, Steiner realized that the mission was set up for failure, hence why they were assigned a rookie as a replacement and were provided with no extraction.[4]

On December 19th, Kaminsky sortied in the Kämpfer to create a distraction while his three teammates infiltrated the base disguised as Federation soldiers. Both the colony defense force and the Earth Federation's Scarlet Team deployed in an attempt to stop the Kämpfer, but were all quickly destroyed. Unfortunately, a Federation guard in the base saw through the infiltration team's disguises just as they reached the Gundam, forcing them to engage in a firefight. All except Wiseman were killed during the fight.[4]

With the Gundam still intact and the status of the team unknown, Operation Rubicon was declared a failure,[5] and the Cyclops Team was recorded as destroyed.[1] 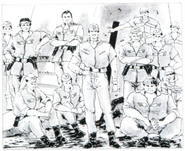