1
Cyber Newtype Story: MAD WANG 1160 (強化人間物語 MAD WANG 1160, Kyouka Ningen Monogatari: Mad Wang 1160?) is a manga originally serialized in MS Saga and written by Kaoru Morishita. It is a continuation of his previous Cyber Comix story Cyber Newtype Story: Another Z Gundam Story. The story is set in the distant future of the Universal Century timeline, departing from the normal setting of Gundam. It should be noted that the term "Gundam" is not utilized in this work, and is one of the first Gundam works to implement nanotechnology in the story, which was also used in Turn A Gundam, and Faster-than-Light travel which would later be used in Mobile Suit Gundam 00.

Mad Wang 1160 takes place in the year UC 1160, some 1072 years after the events of the manga Cyber Newtype Story: Another Z Gundam Story. The three main characters, Shiva Yips, Decoder S. Wallenstein and Mell Mekanika awake from cold sleep (cryonics) in each of their colonies and are swallowed up in the Earth vs. the Outer Space Alliance's battle. 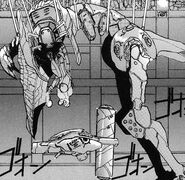