The Cui is a personnel carrier from Mobile Suit Gundam.

A a single 2-barreled machine gun was mounted on the top of the tower that extended from the center of the vehicle.

During Ramba Ral's attack on White Base, he and his troops used Cui transports to get close to the ship, before launching jetpack soldiers to board the assault carrier. The status of these vehicles is unknown after the attack.

Bone Abust's Gaw Carrier was carrying a Cui transport when under fire from the 08th Mobile Suit Team while they were air-dropping. 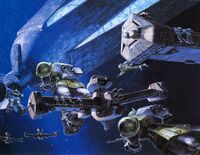 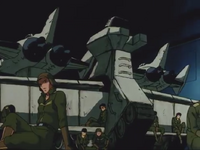 Cui transport in the Gaw's hangar