Cucuruz Doan was a mobile suit pilot for the Principality of Zeon, piloting a MS-06J Zaku II Ground Type. During one battle, his gun misfired, resulting in the death of several civilians. Doan was then ordered to kill the children of the civilians he had accidently killed. But Doan could not bring himself do it, and deserted the army, taking the children with him. He established residence on an island in the Pacific, swearing an oath to himself to protect them.

Shortly after, Amuro Ray, piloting his FF-X7 Core Fighter, shows up on the island. Doan approaches him in his Zaku and asks him to surrender, but Amuro refuses. Despite Doan saying he doesn't want to fight, the two engage in a short skirmish that ends with Doan knocking Amuro out and hiding the core fighter.

Initially, the two do not get along, with Doan refusing to return the Core Fighter to Amuro and Amuro believing him to be an enemy who has brainwashed the children. But when a Zeon force consisting of a P01B Luggun and another Zaku show up and attacks the island, Doan takes Amuro to where he stashed the Core Fighter— behind the waterfall, next to his Zaku— and the two work together to fight off the invaders. Amuro reforms the Gundam and shoots down the Luggun, but Doan tells Amuro to leave the Zaku to him. As Doan explains his relation with the children, Amuro sympathizes with him. He explains that had sworn never to use guns again and instead use what he called "mobile suit martial arts". Doan destroys the other Zaku and throws its remains into the ocean.

Though the fight is over, Doan says he and the children are no longer safe. Amuro uses his Gundam to throw Doan's Zaku in the sea before departing and leaving Doan and the children in peace. Doan tells the children that Amuro did the right thing.[1]

Watching Amuro throw out the Zaku

Cucuruz Doan before he deserted his army. 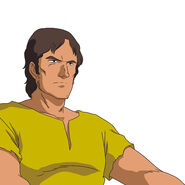 Retrieved from "https://gundam.fandom.com/wiki/Cucuruz_Doan?oldid=428113"
Community content is available under CC-BY-SA unless otherwise noted.