Crux Dogatie (クラックス・ドゥガチ) is the primary antagonist of the Mobile Suit Crossbone Gundam manga. Leader of the Jupiter Empire and father of Bernadette Briett.

One of the earliest colonists sent to Jupiter, Crux Dogatie was the leader of the space colonies of Jupiter. According to himself, he spent seventy years building the Jupiter colonies, creating a nation from almost nothing.

However, the Earth Federation, having never given the Jupiter colonies any assistance despite their hardship, proposed a political marriage with Dogatie when he was over eighty years old in order to control Jupiter. This act filled Dogatie with a burning hatred toward the Federation. His hatred was only worsened by the fact his young wife was filled with a kindness that can never be produced in the harsh environment of the Jupiter colonies, causing Dogatie to feel that everything he did for the last seventy years was ultimately for nothing.

In order to exact vengeance upon the Federation and Earth itself, Dogatie presented himself as a man of peace toward Earth, gaining the trust of the Federation while he secretly founded the Jupiter Empire. Using the harsh environment of Jupiter to his advantage, he spread the idea that the people of Jupiter would destroy the Federation one day and take Earth for themselves, freeing them from the hardship of having to ration even the most basic of necessities, such as water and oxygen. Soon, he had an army of fanatical followers at his disposal.

However, only the higher ranking members of the Jupiter Empire, such as the Death Gale team and Karas, knew Dogatie's true plan: he never wished to take over Earth at all, and only wanted to destroy all life on the planet. Since the colonies already possessed the ability to manufacture everything humans need to survive, they believed that Earth is not needed for the Jupiter Empire, and that Dogatie planned to turn Earth into a massive resource satellite under the control of the colonies. Once the only humans left are forced into space colonies, every aspect of life, from production to population would be strictly controlled, which they believed would eliminate overpopulation and the conflicts it causes.

During his final battle with Tobia, however, Dogatie revealed that even that was only a falsehood. He did not care at all about what happens to Earth after it is destroyed, he only wanted to watch it burn. During his final moments, his wish was granted in the form of a dying hallucination as the Divinidad burned around him.

After Kincade Nau and Tobia Arronax of the Crossbone Vanguard infiltrated a Jupiter Empire base and acquired intelligence on Dogatie's whereabouts, the Crossbone Vanguard launched an all-out assault on his location: Io, one of Jupiter's moons. Despite heavy resistance from the Jupiter Empire forces, they managed to break through their defenses and reach the headquarters, only to discover that the "Dogatie" in the headquarters was only a mechanical decoy, controlled by one of nine identical Bio-Brain units implanted with Dogatie's personalities.

The Bio-Brain Dogatie revealed that the other Bio-Brains have already awoken and that Jupiter Empire's main force was already heading for Earth, he then activated the Io base's self-destruct system, ignoring the fact that thousands of Jupiter Empire soldiers are still present.

Despite Kincade Nau's best effort, he was unable to disarm the self-destruct system in time. However, to the shock of everyone present, Bernadette Briett deactivated the system using a code that only Dogatie and those closest to him knew. She revealed herself to be Tetenith Dogatie, Crux's daughter, and confronted Dogatie's Bio-Brain, accusing him of lying to her about the people of Earth being cruel and savage. Meanwhile, the real Dogatie was aboard the Jupiter Empire flagship Jupitris 9, which was heading to Earth.

In the midst of the chaos created by Zabine Chareux's mutiny, both Tobia and Bernadette were kidnapped by Imperial agent Karas and taken to Jupitris 9. Bernadette, who was brought before Dogatie, refused to talk to a "robot" and demanded to speak to her real father. However, Dogatie revealed his eight remaining Bio-Brains, all of which were identical to him. Bernadette begged her father to stop the invasion of Earth, only for him to reveal that he never intended to conquer Earth. He also told her that he had absolutely no love for her, and only wanted her close to him to calm the people.

In the meantime, Tobia was sentenced to death and forced to fight in a gladiatorial match against the captured Crossbone Gundam X-2, with Dogatie promising him amnesty should he win. Despite the overwhelming odds, Tobia was able to trigger the X-2's decoy balloon launcher and used the balloon to blind the Gundam's pilot, Rosemary Raspberry. This forced her to open the cockpit to see, allowing Tobia to hijack the Gundam and rescue Bernadette.

By launching the X-2 as a decoy, Tobia planned to escape by installing extra thrusters and oxygen tanks to the X-2's Core Fighter. However, Jupiter Empire soldier Barnes Gernsback, whom Tobia previously met, saw through his plan and caught up with him. Though Barnes allowed Tobia to leave, he refused to let him take Bernadette with him, and Bernadette decided to stay, with Tobia promising he will come back for her.

Three days after Tobia's escape, Dogatie received a report that Tobia's Core Fighter was recovered by the Mother Vanguard. While his aide was puzzled about how Tobia learned about Mother Vanguard's survival and trajectory, Dogatie mused to himself that Tobia may have "sensed" them instead, implying that he had become a Newtype.

When Jupitris 9 reached Earth, Dogatie presented himself as an ambassador of peace to the Federation. By having Zabine Chareux attacking the Federation forces in the X-2, he tricked the Federation into attacking the Crossbone Vanguard and sent his own forces to assist them. During the ensuing battle, Bernadette was forced to deploy in the Elegolea, a fully automated mobile armor, in order to raise morale. Dogatie did not care about the possibility of her dying, saying that her death would boost morale even more. 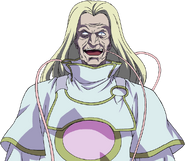 One of Dogatie's Bio Brains, as seen in Super Robot Wars V