Cozun is a veteran in Ramba Ral's squadron and one of Ral's wingmen along with Acous. He pilots a Zaku II J-Type and usually accompanies Ramba Ral in battle. Although he does well in his first battle against the White Base, Cozun is cornered by the RX-77-2 Guncannon (piloted by Amuro Ray) while retreating from a later battle, and is taken prisoner. He breaks out using an exploding tooth, and manages to send classified information on the White Base to Ramba Ral. While attempting to escape, Cozun is killed when Omar Fang uses a bazooka to open a door between them, sending Cozun spiraling to the ground below.

Cozun is one of Ramba's old friends and subordinates, and was part of Zeon's military during outbreak of war. Aspiring to rejoin Ramba's unit, Cozun became a mobile suit pilot for one of the new Zaku IIs but was surprised to learn that Ramba had been discharged from active duty for refusing orders.

Finding Ramba in a stupor inside Crowley Hamon's bar, Cozun reveals that he was being sent to help fight at Loum. Ramba does not make an effort to stop Cozun but warns him not to die because the Zabi family were not worth dying for.

During Loum, Cozun would be among the forces that were awed by Char Aznable's speed. Noticing that Char had emptied his magazine after destroying a cruiser in a single shot, Cozun offers to pass his spare, but the future commander politely refuses and urges Cozun to earn merit for the absent Ramba. 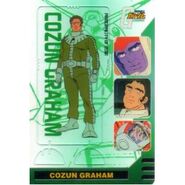