The Correct Century (コレクト・センチュリー, Correct Century?) (aka Seireki (正暦, Seireki?)) is the fictional timeline of the anime television series Turn A Gundam and its related projects. "Seireki" is a wordplay on the Japanese term for the Common Era (C.E.) Western calendar system, 西暦, which is also pronounced as "Seireki".

Seireki is the theoretical result of a merging of the other timelines seen in the Gundam franchise prior to Turn A Gundam. Set in an indeterminate number of years into the far-flung future, the Seireki (True History) is a universe in which all technology on Earth and human civilizations in space, except for the Moon, were destroyed - the culmination of mankind's "Black History". As a result, the technological level on Earth in this timeline is comparable to that of the real world in the early 1900s.

In stark contrast to the backwards nature of Earthlings is the almost utopian society of the Moonrace, a futuristic society which has changed the barren landscape of the moon into a paradise. The Moonrace is the only group which has advanced to the point of having their own Mobile Suits; the people of Earth only find Mobile Suits as relics of the far-flung past in archaeological digs, such as the MS-06 Borjarnon and the titular SYSTEM ∀-99 ∀ Gundam.

Seireki hints several times at the fact its past is the culmination of events from every previous Gundam series; however, the full truth is sealed away in the chronicles of the Black History, which is hidden on the moon, with confirmation in the form of footage of pivotal battles from the previous Gundam series. An attempt to recreate the Black History by Gym Ghingham becomes the focus of Turn A Gundam's plot when it nears its climax.

pre-C.C.
The Black History begins. A war between the peoples of the Earth and space occurs that lasts for centuries and causes immeasurable devastation. After the Black History is brought to an end. With the Turn X Gundam defeated, the Turn A Gundam uses its Moonlight Butterfly ability to obliterate all advanced technology and return the Earth's civilization to a pre-industrial state.
1640 C.C.
On Earth, technology has returned to the point that sailing ships dominate trade and warfare on the oceans.
2045 C.C.
Dianna Soreil first proposes resettling the Moonrace on Earth, but Agrippa Maintainer opposes her plans.
2225 C.C.
Will Game born.
2245 C.C.
Dianna Soreil goes to Earth, where she meets Will Game. She is forced to return to the Moon and enter suspended animation before Will can return from an expedition and propose to her. Around this time, the Moonrace sends a test group of colonists called Red Team to Earth, and brings a number of willing Earth families to the Moon.
2270 C.C.
Syd Munzer born.
2310 C.C.
Michael Gern born.
2317 C.C.
Yanny Oviess born.
2319 C.C.
Will Game III born.
2320 C.C.
Phil Ackerman born.
2322 C.C.
Joseph Yaht born.
2325 C.C.
Poe Aijee born.
2326 C.C.
Guin Sard Lineford born.
2327 C.C.
Harry Ord and Miashei Kune born.
2328 C.C.
Loran Cehack, Fran Doll, Keith Laijie and Kihel Heim born.
2329 C.C.
Lily Borjarno born.
2330 C.C.
Sochie Heim born.
2343 C.C.
Loran Cehack, Fran Doll and Keith Laijie are sent to Earth by the Moonrace as observers. They take up residence in Vicinity Town and Nocis City. Moonrace officials also contact Guin Sard Lineford via radio to negotiate in preparation for the Moonrace's Return.
2345 C.C.
The Moonrace begins the Return, and Dianna Counter forces land outside Nocis City. The “White Doll” (WD-M01 System ∀-99 ∀ Gundam) is reactivated during the Coming Of Age ceremony, and the Moonrace and Amerians go to war. Dianna Soreil is reawakened from suspended animation, her biological age only 19, and journeys to Earth aboard the Soleil. 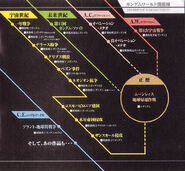