The Cornix is a variable mobile suit that appears in the manga Mobile Suit Crossbone Gundam: Steel 7. It is used by the leader of the Jupiter Empire, Callisto's Shadow.

With the receipt of the XM-X2 Crossbone Gundam X-2, the Jupiter Empire's scientists went to work reverse-engineering it in order to produce a "Jovian Crossbone Gundam". The end result of this project was the Amakusa; however, following its defeat at the hands of the XM-X1 Crossbone Gundam X-1 Kai Kai "Skull Heart", the original design was taken back to the drawing board, resulting in a machine that no longer bore any resemblance to the Crossbone Gundams. That machine was the Cornix, which surpassed the performance of the Amakusa, as well as that of the original Crossbone Gundams. Drawing inspiration from the EMS-VSX1 Quavarze, the Cornix possessed the ability to assume a high-speed flight form, but could further deform itself by shifting the position of its arms and legs thanks to its variable frame. Because the flight form was intended for atmospheric combat, the limbs' variability was useful not only for AMBAC, but also to reorient its propulsion and thrust-vector, meaning in the hands of a skilled pilot it could be almost impossible to hit. Finally, the Cornix's head-mounted mega particle cannon, another vestige of its roots in the Quavarze, was designed so that the Crossbone Gundams would have no way to counteract it, since it could easily penetrate their beam shields.

The Cornix was piloted by the leader of the Jupiter Empire, Callisto's Shadow, in U.C. 0136. 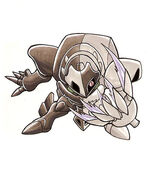 Retrieved from "https://gundam.fandom.com/wiki/Cornix?oldid=425542"
Community content is available under CC-BY-SA unless otherwise noted.