The Cornelius-class of ship is a tender ship that was developed to support the Earth Alliance's new Archangel-class assault ship. Because they are designed to work together, they bear a strong resemblance, namely in how both class of ships possess two bow sections that each contain a hanger. Additionally, the two ships can easily connect their bow sections to each other, allowing for easy and rapid resupplying of the Archangel-class. Only a small number of Cornelius-class ships have been confirmed to exist; there are at least three, possibly as many as five including the ReHOME, which was acquired and substantially modified by the Junk Guild some time after its abandonment during the Heliopolis incident. On at least four occasions, the Atlantic Federation is shown to have deployed one or more standard Cornelius-class ships.

The Junk Guild's ReHOME has several distinguishing features. Multiple manipulator arms were added to the top and sides, it also has a set of laminated shields (for countering beam fire) and a set of chunky "wedge-shaped" shields (for countering physical attacks) for defense. The ship's propulsion section also appears to have been somewhat modified, and its two frontal "arms" lengthened - evidenced by the fact that there are four lateral hatches on the outside of each to the unmodified Cornelius's three, as well as an upper hatch on each one that is absent on the original. However, the most important modification was done to the ship's computer - integrated into it is the GG Unit, a device that contains the brain of George Glenn, the first known Coordinator. Because of this, Glenn functions as the ReHOME's captain, and can pilot any of the mobile suits carried aboard as long as they can maintain a telemetry link to ReHOME. The ReHOME has minimum armament, with a pair of Positron Blaster Cannons, similar to the Archangel's "Lohengrin" cannons, mounted horizontally underneath the primary cargo bays.

The Cornelius-class ship ReHOME is equipped with two Lohengrin positron cannons mounted horizontally underneath the primary cargo bays. These cannons were not used until after the ReHOME returned to Earth from Mars, at which time Lowe Guele commented that they were a recent acquisition, suggesting that the ship originally did not have any weapons.

The Cornelius-class was a tender ship for the Earth Alliance's new Archangel-class assault ship. During the destruction of Heliopolis, one such Cornelius-class was abandoned. From there, it was salvaged by unknown parties and ended up on the civilian vessel market. When the Junk Guild team lead by Lowe Guele began to plan a return to space after some time on Earth, Liam Garfield was sent to acquire a new ship, and managed to purchase the abandoned Cornelius-class. After modifying the ship, both on the exterior and interior, it was christened ReHOME, and began service under the Junk Guild's flag.

The ReHOME would serve well as the home vessel for Lowe's team throughout the remainder of the First Alliance-PLANT War, as well as serving as a tender for the Clyne Faction. The ReHOME itself is briefly seen alongside the FFMH-Y101 Eternal - presumably resupplying it as well as the Kusanagi and Archangel - at roughly the time of the Atlantic Federation's nuclear strike on Boaz. During the war, the ReHOME also discovered the GENESIS Alpha. The crew later used GENESIS Alpha to fly to Mars. Later, in C.E. 73 the ReHOME, along with Serpent Tail, the ZGMF-X12 Gundam Astray Out Frame and Rondo Mina Sahaku's forces tried unsuccessfully to use the GENESIS Alpha to push away the remains of Junius Seven.

While the Earth Alliance did lose the ship that would eventually become the ReHOME following the Battle of Heliopolis, the Atlantic Federation retained multiple Cornelius-class ships, though the exact number cannot be confirmed. One Cornelius-class was seen resupplying the Archangel as part of the Alliance's 8th Fleet in space, shortly before its destruction.[1] An identical Cornelius-class tender was also seen landing at the Earth Alliance's Ptolemaeus Lunar Base, where the Dominion was being prepared for launch,[2] though whether this is the same ship is uncertain, as it is not clear whether or not that ship was destroyed in the Le Creuset Team's subsequent attack. Two Cornelius-class were seen resupplying the Sixth and Seventh Orbital Fleets following the destruction of Boaz;[3] however whether either of them are the same ship that appeared previously with the Eighth Fleet or at Ptolemaeus cannot be confirmed. 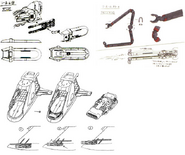 A Cornelius-class from the 8th fleet resupplying the Archangel (Flay's Decision, HD Remastered)

Cornelius-class resupplying the Alliance fleets after the Battle of Boaz (1) (The Nightmare Reborn, HD Remastered)

Cornelius-class resupplying the Alliance fleets after the Battle of Boaz (2) (The Nightmare Reborn, HD Remastered)