A military prisoner shipped to Earth by Agrippa Maintainer. Nander was an elite soldier during the Dark History. The Moonrace's cryogenic freezing techniques have allowed him to survive for thousands of years after the end of the war, at the cost of sustaining severe brain damage. He is delusional and almost childlike when not on the battlefield.

Nander initially appears alongside Jacob and Bruno as a surprise present from Agrippa Maintainer to Dianna Soriel to assist the Dianna Counter forces in subduing the Turn A. Nander is obsessed with destroying the Turn A because he remembers the suffering that Gundams were responsible for during the Dark History. His fixation leads to the destruction of Nocis City. In a climactic showdown between the Turn A Gundam and Corin Nander's Eagail, Corin's Eagail falls into the lava inside of a mountain cycle. Corin is thought dead, however he resurfaces in the Garb of a Buddhist monk. At first he seems to have lost his memories and his personality seems more docile, if equally spontaneous and childlike. In this form Dianna Soriel again encounters him. She is confused by his shift in personality, but after some uncomfortable moments she befriends him.

Upon a town holding a ceremony to honor the Turn A Corin goes breserk, regaining all his memories and losing all mental control as he embarks on a rampage to destroy the straw replica of the Turn A. Rolan Cehack uses his own Turn A to assist in the illusion that the straw statue is real and when Corin defeats it he believes that he has at last slain the Gundam. Later on in the series he realizes that he had only destroyed a replica, but has regained more of his senses and thus chooses to fight alongside Rolan, Dianna and those who oppose Gym Gingham. In the final battle he fields in a customized Kapool, painted red and bearing Corin's trademark Minchi Drill. He also sports a Rocket Punch, that while common in mecha anime, is a rarity in Gundam. Corin is killed when his Kapool is destroyed by the Turn X's Moonlight Butterfly. 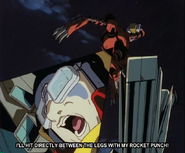 Retrieved from "https://gundam.fandom.com/wiki/Corin_Nander?oldid=282019"
Community content is available under CC-BY-SA unless otherwise noted.