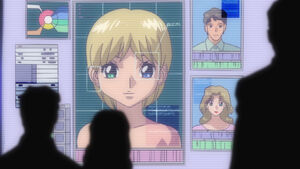 Coordinator (コーディネーター, Kōdinētā?) is a genetically enhanced human being, whom can have a number of enhanced traits including faster learning, and stronger and faster bodies that are virtually immune to diseases.

In CE 15, a highly respected man named George Glenn announced the shocking news that he was the first "Coordinator", being born following a genetic manipulation procedure, resulting in a human "engineered" to be better. He disclosed the entire process to create a Coordinator to the public.

The genetic modifications that create a Coordinator had to be performed in the earliest stages of embryonic development. The Coordinator embryo was then reinserted back into its mother for gestation. These genetic enhancements are then passed on to the Coordinator's children without the need for more enhancements. When Natural parents have had their child turned into an Coordinator, the child is described as a "first generation". On the other hand, those born from parents who are both Coordinators are called the "second generation".

Those who were born naturally - that is, without this procedure - became known as "Naturals".

For many years, after George Glenn's revelation, Coordinators remained illegal. When the ban was repealed, in the CE 30's, the Coordinator Boom started and lasted until the CE 50's. Following the rapid and widespread diffusion of Coordinators, major social unrest followed, throwing the world into chaos. Many Naturals started to shun Coordinators out of jealousy for their abilities and/or for ethical reasons, stating that they were created unnaturally. Anti-Coordinator pressure groups, such as the radical Blue Cosmos, began labeling Coordinators as "un-human" and declaring they had to be exterminated "for a blue and pure world".

As the major political blocs began building the space colonies, known as PLANTs, these gradually became a new home for Coordinators. The Naturals intended to make the Earth their exclusive domain, although it was not uncommon to find Coordinators and Naturals living peacefully together in "neutral" nations such as the Orb Union.

By the mid-50's, the situation had deteriorated to the point that Blue Cosmos members were in positions of power across the Atlantic Federation, and Coordinators had largely retreated to either neutral nations like the Orb Union or into space in PLANTs, where they were more than welcome.

A derogative term among Naturals for Coordinators is "Patchworker", a reference to their "patchwork" DNA.

In addition, there is the problem that the birth rate of the "third generation" Coordinators and beyond is rapidly declining due to the negative effects of genetic improvement, and in the PLANTs, there is a marriage control system that allows only compatible Coordinators to marry each other. This reality has led to a confrontation between Siegel Clyne, who advocates regression through interbreeding with Naturals, and Patrick Zala, who advocates a solution through the advancement of genetic technology.

Another potential flaw in Coordinators is that there is a discrepancy between how a Coordinator fetus is intended to develop and how the child really turns out. In many cases, unwanted genetic traits would appear in the baby, arguably due to the inability of the mother's womb to pose as an adequate environment to support the genetic modifications. There are also rare cases of Coordinators who have defects in basic sensory functions due to complications in the genetic manipulation process and they require implants or external devices to compensate (e.g. Riika Sheder).

In the early 50's, a renowned scientist, Professor Ulen Hibiki, proposed the usage of an artificial womb to circumvent the natural womb's shortcomings. The project was funded by Mu La Flaga's father, Al Da Flaga, who wanted to clone himself. Many "prototypes" failed, including Canard Pars, the only one known to have survived, before the last and successful Ultimate Coordinator, Hibiki's son Kira Yamato, was born in May 18, CE 55. Kira grew up completely unaware of his origins, only to learn of it later in the First Alliance-PLANT War.

According to the "GG Unit", an artificial intelligence said to be derived from the memory engrams of George Glenn's brain, Coordinators have strayed from their intended purpose: to "coordinate" the next step of humanity's evolution, as the name indicates. George Glenn never intended for Coordinators to view themselves as a superior race, but in Glenn's eyes, anyone who works for the betterment of mankind is a true Coordinator, regardless of whether their genes have been enhanced or not. Unfortunately, this enlightened view is not shared by many on either side of the Earth/PLANT conflict.

These Coordinators are specifically created for combat purposes (hence the name), and have better fighting capabilities than normal Coordinators. The Combat Coordinator development program was started by the militaries of the PLANTs-sponsored nations, predecessor of the Earth Alliance. Some of those behind the program were worried about the abilities of the Coordinators and thought the best way to resolve their worries was to create superior Coordinators of their own.