Conille Almeta (コニール・アルメタ, Konīru Arumeta?) is a minor character that appears in Mobile Suit Gundam SEED Destiny. A young resistance fighter from the Gulnahan Ravine, she took part in freeing it from the Earth Alliance during the Second Alliance-PLANT War.

She got off to an uneasy start with Shinn Asuka who was suprised by her age whereas she was put off by his laid-back attitude.

During the Second Alliance-PLANT War, she boarded the Minerva in her buggy to hand over vital data that later allowed them to destroy EA's Lohengrin Gate. Her first impressions of Shinn led her to give the data to his commander, Athrun Zala instead whom she believed to be a better choice to lead the mission. When Trine is called to the bridge, she emotionally explained that the last time ZAFT attacked the battery, a rebellion broke out against the Earth Forces, resulting in many deaths. Athrun, then took her to the bridge. After Shinn destroyed the Lohengrin Gate with his Impulse, she was among the townspeople attacking and rebelling against Earth Forces personnel and cheerfully celebrated their victory with Athrun and Shinn.[1]

When Lacus Clyne took over Chairman Durandal's speech, causing mass confusion, she reminded the town that ZAFT were the good guys and that Orb was an ally of the Earth Alliance, a fellow resistance fighter stepped up by her side to rhetorically ask the town who oppressed them and who liberated them.[2]

During the battle to destroy the Requiem, she was with the other resistance fighters looking up at the moon where the battle was taking place.[3] 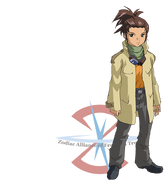 Retrieved from "https://gundam.fandom.com/wiki/Conille_Almeta?oldid=452021"
Community content is available under CC-BY-SA unless otherwise noted.