The Command Vehicle is a military vehicle deployed by ZAFT. It was first introduced in the TV anime Mobile Suit Gundam SEED.

An electric-drive, two-seater, six-wheel open car. The vehicle has no doors and bucket seats, the rear of the seats is a cargo bed, and there are a pair of tow hooks on the bumper for towing, and although it is unlikely to see much action on the battlefield where huge MS weapons are used, it is often used for transporting troops within the base and for communication. It is also capable of traveling fast enough to keep up with the speed at which a TMF/A-802 BuCUE is moving.

One command vehicle was used by Andrew Waltfeld numerous times during the Desert Dawn Campaign. Andrew used the command vehicle to observe the tactics and strategies of the GAT-X105 Strike Gundam and the battleship Archangel during his Attack on the Archangel.[1] Andrew used this military vehicle again during the Attack on Tassil,[2] and abandoned it to his right-hand-man, Martin DaCosta, during the Retaliation of the Desert Dawn to go head-to-head against the Strike's pilot, Kira Yamato, in battle.[3] 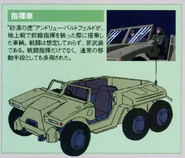