Evolved from an earlier class of twin-hull Assault Lander employed to carry its troops and land-based equipment, the Columbus-class Space Transport Ships are of the Earth Federation's fleet and were created to keep the space fleets supplied while they were not in action. Columbus-class ships were successful in this role, but many of the vessels were commandeered by the space fleet commanders for use as makeshift mobile suit carriers during the One Year War, as their large pair of cargo bays were well suited for carrying large volumes of material. However, unlike its earlier iteration, each Columbus-class ship had no armaments and were completely unprotected without an escort.

During the One Year War, the hit-and-run tactics employed by the Principality of Zeon's mobile suits devastated the Earth Federation's ships, which were ill-equipped to fend off the small and agile mobile weapons. With the Earth Federation's introduction of the RB-79 Ball, it became necessary to convert ships to support these mobile weapons. Many of the Columbus-class supply ships were converted to carry and resupply Balls in their hangars

Pair of Colombus stationned at Solomon

The 'Beehive' from the Thunderbolt Manga 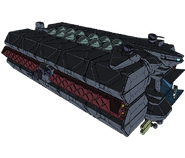 Beehive
Retrieved from "https://gundam.fandom.com/wiki/Columbus-class?oldid=498416"
Community content is available under CC-BY-SA unless otherwise noted.