Code Phoenix (コード・フェニックス, Kōdo Fenikkusu?) is one of the fictional character and presumably one of the main protagonist appearing in SD Gundam G Generation Over World. He was following his request to pursue both Barbatos Neuro and Code Amelias, where they attempt to distrupt the dimensional balance. In the game, he pilots the prototype of GGF-001 Phoenix Gundam, GGF-000 Master Phoenix.

A mysterious man who pilots the Master Phoenix, he rushes to the Generation System to put a stop to the ambitions of Code Amelias. He is accompanied by Arby, an avian android whose true identity is Aplodia Neuro, deprived of her physical form by Amelias.

He seems to be inspired by Soldato J from GaoGaiGar. 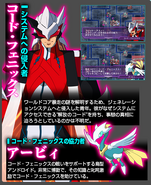 GGOW - Code Phoenix Info
Add a photo to this gallery

Retrieved from "https://gundam.fandom.com/wiki/Code_Phoenix?oldid=198373"
Community content is available under CC-BY-SA unless otherwise noted.