A spy and assassin of Kibaomaru specializing in taking over castles, Cobramaru & his kin had sworn loyalty to Kibaomaru. Cobramaru is designated Cobramaru Black by his sibling teammates (Cobramaru Red, Cobramaru Yellow, Cobramaru Green and Cobramaru Blue). Cobramaru lost his Cobra hood in a battle against the Gundam Force on the Gundamusai. After being removed from Kibaomaru's service for a large series of failures, he attempted to regain his former position by stealing his family's legendary "Cobramaru Black armor" (which grants the wearer the power to perfectly mimic their enemies looks and most of their abilities), but was once again defeated by his enemies and the Cobramaru Black armor was destroyed. Cobramaru attempted suicide before his former master to make amends for this latest failure, but he was stopped by Genkimaru, who made him part of his forces.

Other Cobra Ninjas working for Kibaomaru. They first appear hiding in the rafters of Kibaomaru's room in Tenchijo, and Red and Green drop their tails to prevent Shute from retrieving his backpack. After Kibaomaru delivers his message for Genkimaru to surrender in exchange for the freedom of Shute and Rele, he sends the ninjas out to assassinate Buritenmaru. Along the way they run into Cobramaru Black. Red berates Black for failing to retrieve Genkimaru, and states that the he and the others will restore their honor. Sneaking into Buritenmaru's camp, they use their special darts to take control of some of the Nobusshi. While Red and Blue attack Buritenmaru directly, Yellow and Green cause chaos around the camp, flinging bombs here and there. When all four attempt to finish Buritenmaru off, Bakunetsumaru interferes.They manage to wound Bakunetsumaru, but at that time the samurai channels the Baku Shin Armor, becoming Bakushinmaru. Insisting that the inclusion of the Armor meant little difference, the Cobra Ninjas resumed their attack. They tried to use their Thunder Formation to shock Bakushinmaru, but ended up getting dragged out of the camp. Once they were a safe distance, Bakushinmaru unleashed the Bakkai Tenshou, obliterating them.

Armed with a Blade

Getting annoyed by the Zakos

Recovering the tail portion of his Cobra Black Armor

Using a blowgun
Add a photo to this gallery 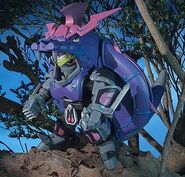 Add a photo to this gallery
Retrieved from "https://gundam.fandom.com/wiki/Cobramaru?oldid=418495"
Community content is available under CC-BY-SA unless otherwise noted.