The talkative, quarrelsome Clotho is constantly arguing with his teammates, and he likes to shout out video game-inspired battle cries as he fights in his Raider Gundam. However, he can be rational at times, and he spends his time between missions perfecting his shooting skills on a portable game system. When in combat, Clotho seems rather psychotic, but mostly very proud. He is extremely upset when the Calamity jumps on his Raider in order to get back to their ship and shows extreme anger at the near misses the Calamity's weapons seem to throw his way. In his final moments, he seems to be suffering from withdrawal in his last attack on the Duel and Buster, showing a complete lack of restraint or self-preservation.

Clotho's skills at first seem average, with a reckless combat style, but over the course of the war they gradually improve. He starts out utilizing the Raider's Mobile Armor mode heavily, firing on either Kira or Athrun when they have an advantage over his comrades.

Clotho was taken as a child by the Earth Alliance to become a "Biological CPU". As a result, his personal data has been erased from the military's records. Due to the deletion of his personal data, most of Clotho's life prior to his training is left unknown. It is implied that he was among the children sent to the Atlantic Federation's training facility at Lodonia. After successfully completing his training, Clotho became the pilot for the GAT-X370 Raider Gundam.

He and his teammates, Orga Sabnak and Shani Andras, were first deployed to attack the neutral Orb Union. Prior to heading out, the team was prompted by Muruta Azrael, their superior and the de facto leader of the Earth Alliance, to avoid damaging the Mass Driver and Morgenroete. First, he and Orga together target the Atlantic Federation's defected Archangel, only to miss.[1] After Orga disembarked Clotho's Raider and went on his own, the latter attempted a second attack on the rogue EA ship, only to get intercepted by and then shift his focus to Kira and his ZGMF-X10A Freedom Gundam. He and Shani together engaged Kira, albeit at the same time, unable to cooperate by some amount. Unbeknownst to Clotho, Athrun Zala was also watching from outside the battlefield, and intervened with the ZGMF-X09A Justice Gundam when the former was about to deliver a potentially final blow to Kira.[1]

Interested by the appearance of a new foe, Clotho and Shani engaged their new target, and Clotho progressively got annoyed by Athrun's dodging.[2] Their fighting soon attracted Orga's attention as he began firing shots during their dogfight. As the fight draged on, the trio also begin firing at each other out of annoyance. Eventually, the effects of Clotho, Shani and Orga's drugs wear off and they fell back after suffering convulsions. Because of their failure, Muruta had the Alliance forces withdraw, and allowed the Biological CPUs to suffer as punishment before they received another dose.[2]

The following day, the trio engaged Kira again, and they had the advantage until Athrun arrived. When Orga's Calamity ran out of power, Clotho mocked Orga, telling him to leave if he wanted and that he was on his own, but Athrun sliced the Raider's mace, forcing him to return as well. Orga then returned the favor by insulting him back and boarding the Raider when it was in its Mobile Armor form, much to Clotho's annoyance at Orga for not asking first. Despite being forced to pull back, the numerically superior Alliance was still winning the overall battle against Orb, and the Alliance was closing in on Orb's mass driver.[3]

Because of their second failure, they were given the same punishment. Although the trio did return to engage Kira and Athrun again, Orb's leader, Uzumi Nara Athha, made the decision to send most of the country's remaining forces into space. While the Archangel escaped unscathed, Clotho, Shani and Orga attacked Kira and Athrun during their attempt to join the Kusanagi. Despite their attempt, the pair were able to grab onto the ship and fire all their ranged weaponry to keep the Biological CPUs from following. Once the Kusanagi escaped, Orb's leaders detonated the mass driver and their base as a final show of defiance to Azrael.[3]

After the loss of Orb's mass driver, the Alliance went on to retake the mass driver at Victoria Base from ZAFT, and Clotho was among those sent to join the Dominion under Natarle Badgiruel. As a part of the Dominion, Clotho once again found himself fighting against Kira and Athrun after the Archangel was found to have taken refuge near the Mendel Colony.[4] Despite engaging, Kira and Athrun were able to eventually outlast the trio, and Natarle ordered a retreat when the battle soon reaches a stalemate.[5]

When the Kusanagi's engines were caught by the Colony's suspension cables, Clotho returned and attacks the Astray teams sent to cut the cables. While he was pushed back by Athrun, a shuttle intruded into the battle with its lone passenger, Flay Allster, claiming to have the key to end the war. Upon seeing this, Kira lunged for the shuttle, and Shani and Clotho were able to make use of the distraction to destroy the Freedom's main camera. Because of the Freedom's damage, Athrun was forced to rescue his comrade while Clotho and his teammates claim Flay's shuttle.[6] Upon Flay's entry into the Dominion, the disc she passes would contain the nuclear secrets of both the Freedom and Justice, as well as the technology needed for the Neutron Jammer Canceller, giving the Alliance forces the justification to finally use nuclear weapons.

In September, C.E. 71, Clotho and his team participated in the attack on ZAFT's space fortress Boaz. When the Peacemaker Force proceeded, he and his team covered them and warded off the ZAFT defenders, until the nuclear missiles destroyed the base, to which he enjoyed the sight of the explosions.[7]

After Boaz's destruction, the trio move on to aid in the destruction of the PLANTs. He then engaged Yzak Jule and his GAT-X102 Duel Gundam in order to cover the nukes targeting the PLANTs. To their surprise, Kira and Athrun returned with their units, now METEOR-docked, and destroy all of the nukes.[7] Enraged at the attempt at their homeland, ZAFT returns fire with GENESIS , which Clotho and his team would witness in shock as half of the Alliance's fleet would be snuffed out in a second. Due to the sudden unveiling of ZAFT's superweapon, all forces withdraw for a brief respite as they respectively deliberate the use of nuclear weapons.[8]

Believing that the weapon could very well target Earth, Azrael pushed for the destruction of the PLANTs once again and ordered the Alliance forces to form a second peacemaker force to nuke the PLANTs.[8] Once again, Clotho was sent to help defend the nukes, but they were stopped by Kira and Athrun once more. Clotho was then struck from behind by the GAT-X103 Buster Gundam, while engaging Yzak. While engaging Athrun, Clotho asked why they are fighting so desperately. When Athrun returned the question, Clotho simply replied that he fights because he doesn't want to lose; not that he ever would.[9]

(His death is portrayed differently in the TV series/HD Remaster and the Special Edition.)

After the death of the two other Biological CPUs, Shani Andras and Orga Sabnak, as well as the Dominion, Clotho's mental stability began to deteriorate as well as Clotho suffering seizures due to his drugs wearing off, and even though Raider's power was almost depleted, he continued to battle.[10] He attacked Yzak in his Duel and the injured Dearka in his damaged Buster as they return to the Archangel. While Yzak was trying to counterattack with Duel's beam rifle, Clotho destroyed it. He keep pressing the assault on Yzak, pushing both himself and his Raider to the very limit. However, Yzak then used the Buster's rifle to replace the destroyed beam rifle, while Clotho charged the Raider's "Zorn" 100mm energy cannon. Both pilots fired at each other simultaneously; Clotho's shot only caused minor damage to the Duel, while Yzak's shot hit its target, destroying the Raider and killing Clotho in the process.[10] (TV series/HD Remaster)

Clotho is killed by Dearka and the Buster immediately after Orga's death. (Special Edition)

Clotho's data file was discovered by ZAFT during the Second Alliance-PLANT War in the ruined Lodonia Lab.[11]

Clotho at his limits

Data from the Lodonia Lab 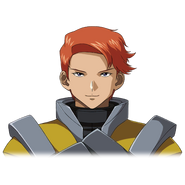