The Clop-class is a space cruiser class introduced in the movie Mobile Suit Gundam: Char's Counterattack.

Introduced around U.C. 0093, this scaled down version of the Ra Cailum is equipped with a pair of twin mega particle guns as its main weapon, supported by fourteen anti-aircraft guns and six missile launchers. The Clop class sports six engines and has one Mobile Suit hangar. Like the Ra Cailum, the Clop class has a set of cooling fins, one under each engine block, that are designed to improve fuel consumption.

The Clop class was intended to replace the older Salamis Kai-class, and while it can carry and support more mobile suits, its firepower pales in comparison. The Clop class never underwent any major class-wide overhauls; however, in U.C. 0123, one vessel, the Space Ark, appeared to be a Clop-class ship stripped for a training role. There is also the Reinforce-class in U.C. 0153, which resembles a Clop-class cruiser without cooling fins. Additionally, the aging Clop-class cruisers of U.C. 0153 are equipped with beam shields.

The main weapons of the Clop-class are a pair of twin mega particle guns situated on the port and starboard hull just under the mobile suit hanger. The guns are capable of pivoting up and down to increase their firing arc.

The Clop-class is equipped with six missile launchers in the bow which, depending on the ordnance loaded, can be used for anti-ship or anti-mobile suit combat. Additionally, it is possible to fire missiles from a rear launcher mounted behind the bridge.

A protective device first used by the mobile suits of the U.C. 0120 era and eventually, battleships during the Zanscare War in U.C. 0153. Many Clop-class ships during this era are equipped with beam shields at the nose.

The Clop class (also called the Ra Clop class) was introduced around U.C. 0093 as a replacement for the Salamis Kai-class cruiser. These ships are light cruisers, and resemble the Ra Cailum-class mobile battleship in design. When the first three ships of the Clop-class were introduced they were assigned to Londo Bell, and saw action in the Second Neo Zeon war. In U.C. 0096, ships of the Clop-class under the control of Londo Bell were used to pursue leads on Neo Zeon remnants that had escaped after the end of the Second Neo Zeon War and would become The Sleeves.

The ship-line would continue service for more than half a century, serving as one of the Earth Federation's primary combat vessels for major conflicts such as the Crossbone Vanguard invasion of U.C. 0123 and the war with the Zanscare Empire that ended in U.C. 0153, with minor upgrades. Although the Clop-class cruiser was intended to be a replacement for the aging Salamis Kai-class cruiser, the older cruiser model was never entirely decommissioned from active fleet service. Instead many Salamis Kai-class cruisers would continue to serve alongside them, likely due to the fact that they are more heavily armed then the Clop-class. 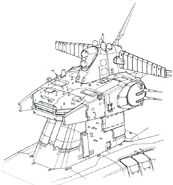 Firing missiles from the bow