Christina Mackenzie (クリスチーナ・マッケンジー, Kurisuchīna Makkenjī?) is one of the main characters from Mobile Suit Gundam 0080: War in the Pocket.

She is a mild-mannered beauty whose appearance and personality are exactly what you would expect from the "girl next door". She is strong-minded and has a strong sense of responsibility, she's also very kind-hearted and caring towards those close to her.

After graduating from high school, she entered the Federation Space Force Academy in September of 0076, and graduated first in her class in 0078. While still in school, she aspired to become a fighter pilot and wanted to be assigned to the War Technology Research Group, an elite unit, but the One Year War broke out almost as soon as she was assigned. She joins a test squadron under the command of the Space Force Integrated Technology Research Headquarters, where her piloting skills are impressive for a rookie. After that, the test unit was reorganized and became the G-4 unit, and he was selected to be Alex's full-time pilot. However, she was not a genuine test pilot, but a computer engineer by trade. As a "shoe-fitter," she is in charge of adjusting the Gundam NT-1's educational computer.

Cristina was the test pilot selected to evaluate the RX-78NT-1 Gundam "Alex" due to her exceptional piloting ability despite being a new graduate from the academy. Although both she and the Alex's engineers mention that the suit was far too sensitive to be used by her effectively as she was not a Newtype. Her hometown is Side 6's Ribo colony, the site of a secret Federation mobile suit R&D facility.

Chris is the neighbor and friend of Alfred Izuruha, being the closest thing to a big sister for Al. At the beginning of War in the Pocket, Chris just returns from Earth, and is assigned to collect field data for the new NT-1 unit, which is "designed for a pilot from White Base". She meets Al just as he's arriving him who doesn't recognized her at first. Soon it starts to rain and he helps bring her spilled possessions into her house. Chris then dries him off and gives Al a new shirt to wear while his dries. The two of them have tea together.

One night, she sees a young man sneaking around Al's house, and thinking he's a burglar, she knocks him out from behind with a baseball bat. The man turns out to be Bernard Wiseman, who Al claims is his "older brother". Despite the rocky start, Chris and Bernie get along well, and if the reaction of Chris' parents is any indication, their attraction to each other is fairly obvious.

Chris would lie of her true status as a test pilot, instead claiming she only worked on data gathering for the military.

In a tragic twist of fate, Bernie is actually a Zeon soldier and a junior member of the Cyclops Team sent to the colony to destroy the Gundam Alex. The team, including Bernie, would sneak into the facility, but its security would catch them in the act when Bernie flubs his answers leading to fight inside the base.

As Mikhail Kaminsky's MS-18E Kämpfer was running amok and had destroyed several GMs, Christina was called to take the Gundam Alex to defeat the unit. Despite the attempts of the Cyclops team, the Gundam Alex is untouched, and Chris boards the mobile suit to face Kaminsky after he had already used up most of his weapons.

While the Alex's Chobam Armor would be destroyed by a chain mine that Kaminsky had grabbed, Christina would be able to put the unit down by firing the Gundam Alex's gatling guns through the Kämpfer's thin armor. Despite her success, she is still scolded by her superiors for fighting at an urban area despite Christina arguing that more casualties would've occurred if she didn't fight.

Bernie, the sole survivor of his team in the battle, later launches a surprise attack on the Gundam in a lone Zaku. Chris also launches to fight and decides to forego her advantage in fighting the Zaku in a flat and open terrain to avoid civilians. She is drawn into a forest, where Bernie had laid several large Christmas balloons and smoke bombs to distract Chris and allow him to enter close range. Chris manages to graze Bernie's cockpit, but the Zaku's heat axe cuts through one of the Gundam Alex's arms and damages the Gundam Alex's cockpit as well. Bernie would tackle the Gundam Alex down the forest's hill before they charge each other for a final attack. Chris impales the Zaku's cockpit with her beam saber and unknowingly kills Bernie. The resulting explosion also incapacitates the Gundam Alex, which had also lost its main camera to the heat hawk. Al, who comes in a rush to stop the fight, only arrives to witness the result of their battle.

After a brief recovery, she leaves the colony to head back to Earth. While bidding farewell to Al, she asks Al to say goodbye to Bernie for her. Al keeps the fact that Bernie was killed to himself.

Almost three months after leaving the colony, Chris would write back to Al, asking if Bernie is doing well and talking about his odd first impression after accidentally being hit with a bat though she is still apologetic for the incident. Because peace was now returning, she was unsure when she'd be able to quit the military, but she expresses her wish to be able to meet Al and Bernie again and to travel to new places. 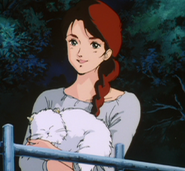 As seen in Mobile Suit Gundam 0080: War in the Pocket (Manga) 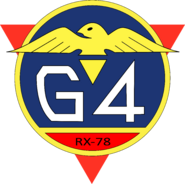