The Chivvay-Class high speed heavy cruiser was a ship developed by Zeon to protect convoys and carry out various tasks, and often served as a flagship. It was normally equipped with two triple-barreled beam turrets, eighteen twin-barreled anti-aircraft batteries, and twelve missile launchers, but was not designed to carry MS. Despite this, its cargo bays could be easily converted to MS hangers if needed.

The primary weapons of the Chivvay-class is a pair of three barrel mega particle guns. One is located in front of the bridge tower, with another on the rear of the vessel, atop the engines. In MS IGLOO, the number of guns is increased to three, with the third mounted underneath the ship's engines.

The secondary weapons of the Chivvay-class, these twin-barrel machine guns are primarily for anti-air/mobile suit defense. The Chivvay-class is equipped with eighteen such guns, nine on each side of the ship, with six on top and three below. In MS IGLOO's version, the number of guns are the same, but their placement on the sides are different, with three guns on the upper deck and another six directly below them. For the Gulltoppr, it is equipped with only sixteen such guns, eight on each side, with two up front and six mid-ship.

The Chivvay-class can mount up to six external fuel tanks to increase the ship's operational range.

The Chivvay-class heavy cruiser was introduced by the Principality of Zeon the very same year the Earth Federation began its "Armament Reinforcement Plan" (UC 0070), long before the Principality began its production of mobile suits. It was originally designed to be a battleship. However, 3 months after its introduction, Earth Federation Forces introduced the Mega particle equipped Magellan-class and the new Salamis-class, both of which have beam cannons as their main guns. This placed the Chivay-class in a difficult position since despite its design purpose as a main battleship, as it lacked the fire power of beam weaponry at the time.

It was later refitted with mega particle cannons due to the Space Attack forces need for ships with enough fire power to match and surpass Earth Federation ships, and the Chivvay-class was still quite suitable for combat due to its strong armor. Also, Zeon lacked the resources and money to develop a new battleship due to the expensive Gwazine-class. The Chivvay-class was a very mobile ship and has enough fire power and armor to serve as a flagship while newly classified as a high speed heavy cruiser. When Zeon finally introduced mobile suits into its combat forces it became top priority to focus its military complex on battleships that could carry and supply mobile suits. As such, Zeon began production on the Musai-class light cruisers, Gwazine-class battleships, and finally the Zanzibar-class cruiser, while the remaining Chivvay-class cruisers' cargo bays were re-purposed into mobile suit hanger bays. A handful of Chivvay-class vessels were even refitted for use by Zeon's space commanders. Some even equipped with a third 3-barrel Mega Particle Cannon turret at the bottom of the ship to increase its fire power and cover its lower area.

After the One Year War, the restored Republic of Zeon was allowed to maintain its independence and a defense force, so long as they agreed to follow certain guidelines set by the Federation, including random inspections. In light of this the Republic of Zeon chose to redesign the Chivvay-class from the ground up, culminating in the Chivvay Kai-class.

In UC 0097, one heavily modified Chivvay-Class known as Gulltoppr was the mothership of a group of Republic of Zeon soldiers led by Zoltan Akkanen, who disguised themselves as remnants of Sleeves. It housed several mobile suits including Zoltan's MSN-06S-2 Sinanju Stein and carried the NZ-999 II Neo Zeong at the bottom. During its final battle at the Helium-3 storage base, the Gulltoppr used the Helium-3 gas tanks as a cover, and was destroyed when the General Revil unexpectedly fired on the tanks, causing an explosion that engulfed the ship. 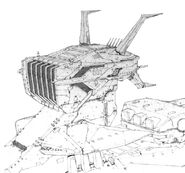 Gulltoppr being destroyed by Helium-3 explosion