The Chimera Corps (a.k.a Ace Corps) is a group of ace pilots hand-picked by Kycilia Zabi of the Principality of Zeon. The team has been featured in Mobile Suit Variations, but the team is the main focus of MSV-R:The Return of Johnny Ridden. The group takes its name from the female creature of Lycia mentioned in Greek mythology, born of Typhon and Echidna.

In MSV-R Jacobius Node mentions a rumor about the Chimera Corps that states they are hiding the treasure of the Zabi family, which was later revealed to be the Zanzibar-class Minaret that contains the fruit of Zeon's weapon research.

The men of the Chimera Corps weren't just ace pilots; most of them were experienced commanders able to support the unit with an abundance of expertise beyond simply piloting skills. Normally they would have been stationed all across the frontline to raise the level of the army as a whole, but they were all brought into a single battalion under Kycilia Zabi's command. In spite of this, the Chimera Corps saw very little action other than during the Battle of A Baoa Qu.

Not much is known about the Corps' early history, and even the date at which they were founded is unknown. It is debated to have been either four weeks before the end of the war, or sometime during or after the Battle of Solomon. What is known is that the unit was founded by Kycilia, who was also responsible for establishing the covert-ops Midnight Fenrir team and Char Aznable's 300th Independent Corps for Newtypes. Despite their high status, the Chimera Corps was not deployed very often, possibly due to the Federation advancing on A Baoa Qu. The battalion was largely broken into four units: the mother ship and support ships formed one fleet; ace pilots were stationed at the center, and additional fleet escorts served as reserves; Finally, the engineering support unit "Hydra".

With a talented group of ace pilots, engineers, and mechanics at their disposal, the team often got the best of equipment from the Zeon forces. At the time the MS-14A Gelgoog were deployed, they were nothing more than test types. In all there were 31 pilots in the corps, with 24 of them piloting the newest model Gelgoog or some variation thereof. The engineering support team "Hydra" were considered the heart of Chimera, and in no time at all they improved and modified the Gelgoogs into specialized units for the battalion. Top engineers and mechanics from all makers such as Zeonic, Zimmad, MIP were transferred in. This team was formed under the pretext of supporting the Chimera Corps, and were based on a ship specifically made for mobile suit modification, equipped with a compact version of the repair and modification system that birthed the Principality of Zeon MS variation group.

In MSV-R Jacobius Node mentions the one responsible for forming the Chimera Corps was Captain Hugh Marquine Kelvin, mobile assault force intelligence chairman. He had one intention in creating Chimera: to create a counter-Newtype unit made up of old-types. After the death of Garma Zabi, Rear Admiral Kycilia promoted Char Aznable to Captain, entrusted him with a newtype unit, and gave him special treatment, a step taken in anticipation of the war's end. Everybody thought a power struggle between Gihren Zabi and Rear Admiral Kycilia after the war was inevitable. While having Char Aznable cooperating willingly rather than through coercion made him a valuable trump card, Rear Admiral Kycilia remained suspicious of his motives, aware of the possibility that he might rally the Newtype unit and either rebel or defect to the Earth Federation Forces. Hugh Kelvin presented to Kycilia the idea of forming a Newtype-extermination unit made up of Oldtype pilots, and the applications of such a team. This mission was assigned to the Chimera Corps, and included the task of developing and demonstrating both tactics and equipment for engaging against Newtypes. Late into the war, two prototype Cyber Newtypes were also assigned to the Chimera Corps: Uma Lightning and Ingrid 0.

The Chimera Corps was most prominent at the Battle of A Baoa Qu and during Operation Clarion. In the final stages of the Battle of A Baoa Qu, the Chimera Corps received orders from Rear Admiral Kycilia to pull out of the fortress and dispatch a portion of their unit. Though how many members actually survived is unknown. It is likely they were killed in action along with Kycilia herself. Presumably, Zeon erased the records of the Corps before the Federation invaded A Baoa Qu. Afterwards, a debate within the Chimera Corps over the usage of the "Ashtaroth" virus led them to split in two, as a mutiny took place that led to a battle among Chimera Corps pilots during their retreat from A Baoa Qu. Eventually, the Chimera Corps were surrounded by a Federation unit under the command of Oxner Cliff. In order to escape arrest and detainment, all Chimera Corps data and equipment was handed over to the Federation, which included the summary of their combat records.

The Return of Johnny Ridden 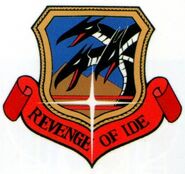