Chara Soon (キャラ・スーン, Chara Soon?) is a character from Mobile Suit Gundam ZZ. She is known for her erratic behavior while piloting mobile suits.

A female commander with an unstable personality. Chara's mood swings are so constant that she sometimes goes out of control during a mobile suit battle. There are times when she will act innocent and shy, while in battle she is noticeably more aggressive, confident, and unpredictable. When trying to get something from men, she often uses "feminine wiles" to obtain it, such as letting Mashymre Cello grab her breasts then getting a verbal confession of it on tape. While imprisoned aboard the Argama, she attempted to seduce both Judau Ashta and captain Bright Noa to help her escape, but failed both times.

Chara's first appearance is when she was sent as an observer by Haman Karn for Neo Zeon officer Mashymre Cello, and was later assigned to replace him as the Endra's captain, due to his constant failures against the AEUG ship, the Argama. After being captured by the AEUG, Chara was forced to serve as a cleaning lady, much to her disgust, under the watch of the two children Shinta and Qum, until she was able to escape while the ship was docked at the lunar city of Granada. She is later seen on an asteroid mine near Axis, overseeing its mining operations, and has apparently became a Cyber Newtype. When remnants of Glemy Toto's rebel forces, consisting of around six AMX-004G Qubeley Mass Production Types, attempted to kill Haman, Chara intervened in her AMX-015 Geymalk. She took them all down and was killed when her mobile suit exploded after crashing into the last enemy unit. 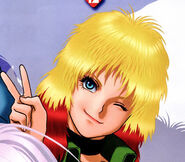