Ceylon, also known as Sri Lanka, is an island country in the northern Indian Ocean off the southern coast of the Indian subcontinent in South Asia.

A land that is part of the Human Reform League. It is a small island in South Asia. The Sri Lankan government has fallen apart because of 300 years of civil war between the Tamil Tigers and the Sinhalese majority. Celestial Being deployed several Mobile Suits to stop the 300 year long war. 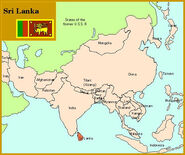 Map of the Human Reform League.
Add a photo to this gallery
Retrieved from "https://gundam.fandom.com/wiki/Ceylon?oldid=396812"
Community content is available under CC-BY-SA unless otherwise noted.