The Centurio were developed by remnants of Principality of Zeon under the supervision of Gihren Zabi. They're developed using espionage data from the CONCEPT-X 6-1-2 Turn X and WD-M01 Turn A Gundam and built exclusively for use by Legion enhanced humans. As result, Centurio series MS may self-repair with nanomachines and can spread them to repair damaged allies. Its most noticeable feature is the halo-like ring hover around it call Relum Dominatus which also act like a defensive barrier. A set of "wings" are attached to the Relum Dominatus, these wings are Centurio's weapons. They can be used as Blade Luminarium by materialising a nanite saber or combining the pair of them to create the Launcher Geminus, a hand-carried gun capable of launch several projectiles - both beam and solid - in a single salvo. The Centurio's arms will fold out when it uses either weapon. 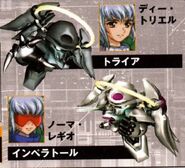 Retrieved from "https://gundam.fandom.com/wiki/Centurio?oldid=488491"
Community content is available under CC-BY-SA unless otherwise noted.