Carta is the Commander of Gjallarhorn's Outer Earth Orbit Regulatory Joint Fleet. One of the few non-corrupt Gjallarhorn officers, Carta believed heavily in code and honour. As such, she highly disapproves of Tekkadan's tactics, such as using other ships as shields or being shot at when she's introducing herself. She also sees battles as an opportunity to honour the Issue family. She is a highly respected officer and generally cares for her comrades as well. She is also meticulous, to the point where she lightly scolds her elite guards about being late for a second when they recited their speech. She is also somewhat cocky, possibly because of being a Seven Star member, and nothing much that could challenge Gjallarhorn. Lastly, she hates being humiliated, and always wanted to be respected.

Carta is familiar with formation patterns as well as ceremonial customs, which can be useful for a fair and square battle. Unfortunately for her, code and honour backfires miserably when her opponents are pragmatic.

Carta Issue is born a member of the Issue Family, the strongest family among the Seven Stars of Gjallarhorn. She was friends with McGillis Fareed and Gaelio Bauduin. After some time, her father fell ill and Iznario Fareed became her guardian.

She was shown as the commander of the fleet guarding the Earth's atmosphere, the Outer Earth Orbit Regulatory Joint Fleet, and vowed to stop Tekkadan from entering Earth. When the Isaribi approached her blockade, Carta ordered her ships to open fire when Tekkadan failed to respond to her halt order. Her mood quickly changed once she realized that Eugene Sevenstark was using the Brewers ship as a shield, which she labeled as barbaric. Both ships soon separated and Carta yelled at her men to fire on both ships. The Brewers ship then released a nano-mirror chaff that blinded the fleet's sensors, so Carta ordered light signals to signal the fleet to fire missiles with time fuses to burn away the chaff. By then, the Isarabi rams one of the orbiting satellites, allowing Orga Itsuka and his party to slip past Gjallarhorn. Infuriated, Carta ordered her fleet to redeploy to the satellite's rescue while the mobile suits engaged in pursuit.

Humiliated by her failure, she and her elite guards went down to Earth to take part in the mission to take Kudelia Aina Bernstein and Togonosuke Makanai. As she made her entrance, her team went into formation and started to introduce themselves, when they were cut short by a shot from Akihiro Altland's ASW-G-11 Gundam Gusion Rebake. After that, she orders her team to attack using the Spearhead Formation, but Mikazuki Augus in his ASW-G-08 Gundam Barbatos quickly broke it by focusing his attack on the EB-06r Graze Ritter that Akihiro had damaged before. She watched as her team was ruthlessly beaten by Tekkadan's Mobile Suits.

She was then subsequently attacked by Mikazuki by clamping her Graze's forearms using the 'Wrench Mace'. But she manages to notice Orga riding a TK-53 CGS Mobile Worker and unknowingly inside it, Biscuit Griffon, not too far from the battle site. She escapes from Mikazuki and pursues the Mobile Worker and succeeds in finishing it off, but not before it threw Orga off. The blow sent the Mobile Worker flying and killing Biscuit, who was still inside. Mikazuki furiously attacks her and throws her to the ground trapping her again, but Orga's cry seemingly distracts him, allowing Carta's remaining forces to rescue her off-screen.

In the third encounter with Tekkadan, Carta insisted to go for a three on three fair and square duel with Tekkadan on the railway, wagering custody of Kudelia and Makanai against safe passage. Eager to avenge Biscuit, Mikazuki ignored her request and immediately dispatched her elite guards on his own, dismembered Carta's Graze and slammed her across the snowy field. However, Mika's final blow was interrupted by Gaelio and the Graze was snatched away, Carta herself was delirious from her wound and mistook Gaelio for McGillis before succumbing to her injuries and passing away.

After Carta's death, McGillis was appointed to her former post as commander of the Outer Earth Orbit Regulatory Joint Fleet. 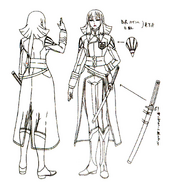 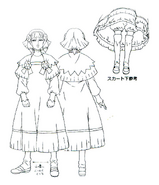 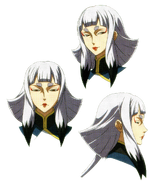 With a young Gaelio in her childhood. (The Final Lie)

With a young McGillis in her childhood. (The Final Lie)

Carta in her pilot suit. (To the Place of Return)

Piloting the Graze Ritter Commander Type (To the Place of Return)

Attempting to introduce the Outer Earth Orbit Regulatory Joint Fleet. (To the Place of Return)

Angered by the deaths of her subordinates. (To the Place of Return)

Experiencing defeat from Tekkadan (Not Yet Home)

Attempting to challenged Tekkadan for a 3v3 duel (The Final Lie)

Carta in a pinch. (The Final Lie)

Carta faintly calls out for McGillis' before she dies. (The Final Lie)

Carta dying from her wounds. (The Final Lie)