Carris Nautilus (カリス・ノーティラス, Karisu Nōtirasu?) is a character that appears in the After War Gundam X series.

Carris Nautilus was born sometime after the massive colony drop that ended the 7th Space War. Growing up in the harsh environment he eventually settled in Fort Severn. Looking for a way to protect the people, he allowed Nomoa Long to use him in an experiment, turning him into a Cyber Newtype.

With his new abilities, Carris was able to pilot the RMSN-008 Bertigo and use its bits to defend Fort Severn from hostile forces. His skills as a mobile suit pilot allowed him to become one of the leaders of the settlement. Under orders of Nomoa Long, Carris carried out an attack on the Freeden and captured Tiffa Adill, severely damaging the Gundam X.

His second encounter with Garrod Ran met with defeat, thanks in part to the upgrades to the Gundam X into the Gundam X Divider and Garrod's observation of Jamil on how to combat the Bertigo's bits. Carris surrenders to Garrod only to be taken by Ennil El back to Fort Severn where Nomoa Long uses him as the control center for the MAN-003 Patulia. The crew of the Freeden are able to rescue Carris and he remains at Fort Severn to help rebuild the settlement.

Carris later comes to the rescue of the crew of the Freeden with the help of the North American Resistance Force, freeing them from a New United Nations Earth execution squad. Joining them he aides them in stealing the Freeden II and goes into space to take part in the 8th Space War. 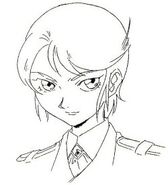 Next Prologue version
Community content is available under CC-BY-SA unless otherwise noted.
Advertisement