Cardeas Vist (カーディアス・ビスト, Kādiasu Bisuto?) is a character from Mobile Suit Gundam Unicorn. He was the head of the Vist Foundation.

Cardeas Vist is a grandchild of Syam Vist and a member of the influential Vist family. In his youth, he was a helicopter pilot in the Earth Federation Forces. He later becomes the head of the Vist Foundation, which exercises a great influence on the Earth Federation government. He also serves as the chairman of the Anaheim Electronics Industrial College. Cardeas was married to Ellen Vist, with whom he had his first son, Alberto Vist. He later left Ellen and began a relationship with Anna Links, who gave birth to his second son, Banagher Links. Anna and Banagher lived in his mansion for a time, where he subjected the young Banagher to a series of tests of his Newtype ability; however, when Anna discovered this, she left and took Banagher with her.

In U.C. 0096, the Vist family planned on giving Laplace's Box, the source of the Vist Foundation's prosperity, to the Sleeves. Cardeas met with his grandfather to inform him that they are going to proceed as planned, but expressed his belief that doing so might create chaos on an unexpected level. Syam believed that the flaws of the Universal Century need to be corrected and hopes that they can find the right person to carry Laplace's Box. As Cardeas turned to leave, Syam thanked him and asked for forgiveness. Turning away from his grandfather, Cardeas admitted, "What we're about to do may lead to the destruction of the world. If anyone can grant you forgiveness, it will have to be me." Cardeas headed to Side 4 colony of Industrial 7, where he planned on inspection the capabilities of the RX-0 Unicorn Gundam, the key to Laplace's Box. He sat as observer in the cockpit while the test pilot took it out for a spin. He instructed the pilot the increase the Unicorn's velocity and fly straight into a debris field. Cardeas remarked how impressed he was with the machine. The diagnostic computer then determined that the pilot's life signs are stable and the psycho-frame G-Force was in expected parameters. Back at the colony, Gael Chan informed Cardeas that he was able to get a hold of a staff officer on Luna II, who confirmed that Londo Bell failed to pursue a group of Sleeves. Cardeas guessed that Bright Noa must be behind this and instructs Gael to keep an eye on the supply fleets. He then turned to his staff and ordered them to delete the Unicorn's testing OS, seal its NT-D and upload the Laplace Program. He then retired to his study, where he viewed Banagher's student records [1].

Gael later informs Cardeas of surveillance footage that shows Mineva Lao Zabi, the princess of Zeon, on the colony. Cardeas also noticed Banagher with her, but feigned ignorance and asked for further information on him. Cardeas met with Banagher and Mineva when they arrived at his mansion. Cardeas asked Banagher to leave, as he felt he has nothing to do with Mineva and didn't want to discuss Laplace's Box in his presence. Mineva, upon seeing Cardeas displeased with Banagher, expressed her gratitude for taking her this far and relieved him. Banagher, however, stubbornly refused to leave until Cardeas had someone remove him from the mansion. Mineva protested the Vist family's rash decision to just give up Laplace's Box. Cardeas assured her that even with the key, it will still take the right person to handle it. Cardeas then met with Sleeves captain Suberoa Zinnerman. Though Zinnerman was expecting the box itself, Cardeas corrected that they're giving the key. A confused Zinnerman then prods Cardeas about the reason for giving the key but not the box. Cardeas explains that Laplace's Box has the potential to destroy the world or make the future that was envisioned at the start of the Universal Century. For that reason, the Vist family is handing over the key to Neo Zeon as a test. Vist then warns Zinnerman that the box would never open if they remain narrow-minded ideologues with a single goal— namely, reviving the Principality of Zeon. Suddenly, the mansion is rocked by tremors. Gael explains that Londo Bell has surrounded the colony. Thinking this to be a trap, Zinnerman drew his gun. Vist is shielded by Gael, and denies it, arguing that Zinnerman must have been followed. Zinnerman demanded that Mineva be returned to them, to which Vist admitted that he was intending to return her from the start and explained that she was in his mansion. Zinnerman mused that it is difficult now for either one of them to trust each other. He then ended the stalemate and decided to flee [2].

Cardeas expressed surprise that the Federation would break its hundred-year old alliance with the Vist Foundation, though admitting that the Foundation had who started it. He and Gael raced to the Unicorn to erase the Laplace Program, as well as the Gundam itself. Once it was confirmed that special forces have infiltrated the mansion, Gael stayed behind to hold of Federation commandos while Cardeas goes to erase the program personally. However, he was captured by his son, Alberto. Realizing that his sister Martha Vist Carbine is behind the raid, Cardeas resists by snapping the neck of a Federation soldier and using his body to protect against gunfire before killing the shooter. However, Alberto manages to fire a fatal shot at his own father. Despite his wound, Cardeas made it to the Unicorn to finish his task. To his surprise, he was discovered by Banagher, who had come looking for Mineva. A furious Banagher demanded to know why he couldn't prevent this war from happening. Cardeas explained that he intended to correct the flaws of the Universal Century and asked Banagher if he had the resolve to carry the weight of the world on his shoulders. Banagher admitted that he didn't have that resolve, but all what he knew is for Mineva to need him. Satisfied, Cardeas entrusted the Gundam to Banagher, and assigned it to his biometric, so that only he could pilot it. He tells the boy that if he proves himself to be a capable pilot, then the Unicorn will grant him powers unrivaled and open the path to Laplace's Box. Cardeas then reveals to Banagher that he is his father, and implores him to believe in the possibility that lies within. He then fell out of the Gundam, muttering that his one wish has finally come true, before his body was incinerated by an explosion [3]. 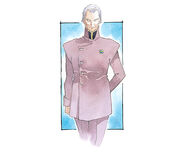