He was a former member of the Earth Federation's special forces. He caught on to the Federation’s injustices and in order to oppose them, Angrazzo formed the space pirates “Bisidian" and sought out the "treasure" EXA-DB to defeat the corrupt Federation forces. He piloted a BMS-004 G-Exes Jackedge during his younger days. He saved the life of a young Wivik Lambro during a Vagan attack. After the encounter with Sid, he came into conflict with Wivik over the treatment of Reuna Inaju, administrator of EXA-DB.

Eventually, he is replaced under as yet unknown circumstances by Captain Ash. 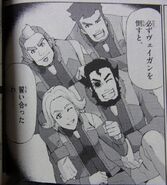 Retrieved from "https://gundam.fandom.com/wiki/Captain_Angrazzo?oldid=225759"
Community content is available under CC-BY-SA unless otherwise noted.