Canard Pars (カナード・パルス, Canard Pars?) is a character from Gundam SEED X Astray. He was a member of the Earth Alliance and Eurasian Federation and pilot of the CAT1-X1/3 Hyperion Unit 1 until the ending stages of the First Alliance-PLANT War. After the war, Canard became a mercenary and piloted the YMF-X000A/H Dreadnought H.

Although Canard's facial expression is stern, he has many similarities with Kira, such as the same physical characteristics (hair, eye color, etc.) and similar voice, but it has not been clarified whether this is because they are related through fertilized eggs or their genes are almost identical. Perhaps due to the fact that he spent his life in a very different environment from Kira, his personality is fierce and aggressive, and he doesn't hesitate to attack and kill people if he doesn't like something.

His abilities are superior to those of a normal coordinator, and is able to fight on even terms with the mercenary unit Serpent Tail's Gai Murakumo. In battle, Canard was known to use his Hyperion Unit 1's "Armure Lumiere" beam barrier to turn his mobile suit into an indestructible target to distract the enemy, allowing his comrades to take them out using their TS-MA2 Moebius mobile armors, which under normal circumstances were easy prey for ZAFT's mobile suits.

When the Earth Alliance acquired the Neutron Jammer Canceller technology, Canard was determined to upgrade his mobile suit with it, so that he would have no constraints on his "Armure Lumiere" beam barrier. He fought against Prayer Reverie, pilot of the YMF-X000A Dreadnought Gundam, trying to obtain the N-Jammer Canceller several times. Canard later destroyed Hyperion Unit 2, piloted by Balsam Arendo when he deserted the Alliance. He then refitted his Hyperion Unit 1 with a N-Jammer Canceller and nuclear engine that he got from the Ptolemaeus lunar base.

In the end, Canard was defeated by Prayer, but did not die; Prayer protected him from the explosion of Hyperion's overloading reactor and apparently died shortly after due to flaws in the cloning process. Shortly after the end of the First Alliance-PLANT War, Canard finally saw Kira Yamato at Reverend Malchio's orphanage. As Canard rushed towards an unaware Kira, finally being able to fulfill his goal of killing him, he suddenly stopped, looked into Kira's eyes, turned around and walked away, finally deciding to abandon his quest and move on with his life.

Later, Canard reunites with his special forces comrades (who had deserted the Eurasian Federation alongside him) to form Mercenary Unit X. He now pilots the rebuilt Dreadnought Gundam, the YMF-X000A/H Dreadnought H.

He first appeared in Chapter 10, interfering with the fight between ND HE and Rondo Gina Sahaku. He demanded from them the location of Prayer Reverie and intends to kill him as he know this Prayer is a fake. After defeating ND HE, he was brought to the base where the carbon human clone of Prayer was present. Canard then learns about the true motives of the clone along with Gai and Lowe, they then jointly defeated him in a battle. After the battle, Canard tried to kill the clone, which was what the clone wanted, but was stopped by Lowe, who then suggested a better way out for the clone. 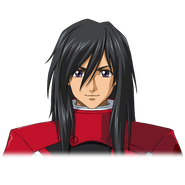