Callisto's Shadow (影のカリスト, Kage no Karisuto?) is one of the primary antagonists of the Mobile Suit Crossbone Gundam: Steel 7 manga.

Callisto's Shadow is the younger brother of Callisto's Light, and brother of Europa Dogatie, making him Crux Dogatie's brother-in-law and Tetenith Dogatie's step-uncle. He serves as a highly placed commander in the Jupiter Empire's military during his brothers rein as President of the Jupiter Empire. Interestingly both he and his brother are Newtypes and share a deep psychic bond.

A highly talented mobile suit pilot he uses his unique machines to single-handedly destroy enemies that are too powerful for regular forces. He is sent to the Earth Sphere on a mission to destroy any technology that could allow people to travel from the Earth Sphere to the Jupiter Sphere within a week, and are thus the only people that could stop the firing of the colony laser.

His first appearance in the manga is while the Crossbone Vanguard are visiting the SNRI lunar base, while trying to devise a plan on how to use the F99 Record Breaker units to get to Jupiter to stop the Thunderbolt of Zeus, When he suddenly opens fire on the facility with the Mass production type Amakusa. 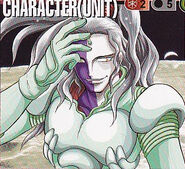 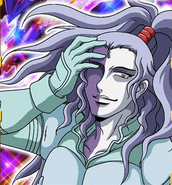 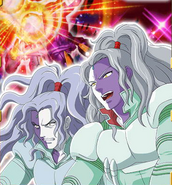 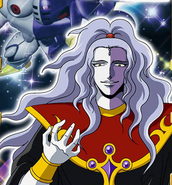