A mobile suit based on the NRX-044 Asshimar from the Gryps War, the Asshimac introduces several modifications to better suit the combat conditions of the Space Warring States Era. The surface of the entire MS has been redesigned and fitted with a thicker "curved" armor to protect itself from physical attacks. The lower portion of the MA mode has also been changed to a disk-shape, but as a result of the additional armor, the overall weight of the unit has been increased. The Asshimar's beam rifle has also been replaced with a live ammunition rifle.

In addition, a monocular sensor common to Cyclops is installed on the head, and it has the role of integrating the communication network and data management of the Cyclops aircraft.

Drum magazine type machine gun. It is equipped in place of the beam rilfe whose reliability has deteriorated due to the decline of technology .

Developed around the design of the Asshimar, a "C" (standing for "Cyclops") was added to the model number to differentiate it from the Asshimar. It has begun to enter mass-production and is expected to become a mainstay mobile suit. 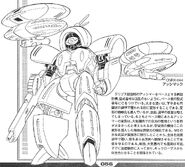 Lineart and Information
Add a photo to this gallery

Retrieved from "https://gundam.fandom.com/wiki/CNRX-044_Asshimac?oldid=468748"
Community content is available under CC-BY-SA unless otherwise noted.