The CMS-B/67 Shaldoll is a customizable racing mobile suit that is featured in the anime series Mobile Suit Gundam AGE.

The Shaldoll is a customizable Mobile Sport (special mobile suit used for racing) produce by the Madorna Workshop.[1][2] It can be easily customized to meet client preferences or to be used for various applications, and several variations are known to exist.[3] Its frame is used as the base for the WMS-GEX1 G-Exes.[4] Its armor appear to be quite strong as it appears to be able withstand the Zedas's beam vulcan attack with no apparent damage whatsoever. When deployed for combat, the Shaldoll can be equipped with basic weaponry such as DODS Guns, beam vulcans, and Shields. Mukured Madorna uses a customized unit known as CMS-B/67M Shaldoll M.

Mounted on the sides of the suit's head, the pair of beam vulcans are used to intercept incoming missiles and enemy units at close range.

A mass produced version of the Gundam AGE-1's DODS Rifle. It is not as powerful as the DODS Rifle, but can still take down UE mobile suits in one shot.

CMS-B/67 Shaldoll was in use by AG 115 and potentially for some years before that. The only known units were built and utilized by the Madorna Workshop. At some point after the Battle of Ambat, the Shaldoll would be used for a new design, the RGE-C350 Shaldoll Custom, a more militarized mobile suit used by the Federal Forces. 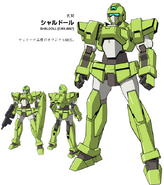