The Zanzibar-class Kai (CCM-91 Chimaira) is designed for MS transportation, and a cargo bay unit has been added to the rear of the hull to increase the mounting capacity of MS. The unit consists of one electromagnetic catapult deck for MS launch, and the interior consists of a hangar and a residential floor.

The CCM-91 Chimaira-class is armed with four mega particle guns, two on each side of the ship. They are locked in a forward firing position, requiring the ship to constantly face the enemy if it needs to use them. They are retractable and can be locked in hatches for protection.

The CCM-91 Chimaira-class is armed with two large launch tubes, each capable of firing a large J-missile, which was capable of seriously crippling or even destroying a ship in a single attack.

The CCM-91 Chimaira-class is armed with five 2-barrel anti-aircraft guns used for defending against enemy fighters and mobile suits. There is one under the nose of the ship, two on each side near the front, and one atop each of its large engine intakes. They are unsuitable for anti-ship combat purposes.

The CCM-91 Chimaira-class is equipped with a large space cargo unit, with a large launch and retrieval deck underneath the ship. The cargo unit is attached to the rear of the ship, equipped with four massive propellant tanks and thrusters, three additional secondary thrusters, and added internal space to hold additional mobile suits or mobile armors.

Chimaira at battle of A Baoa Qu 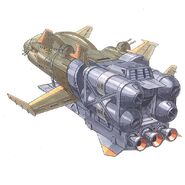 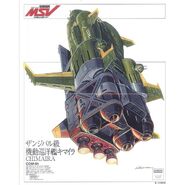