The CBS-70 Ptolemaios (aka Ptolemy) is the tactical mothership of Celestial Being in season 1 of Mobile Suit Gundam 00. The ship would later be succeeded by CBS-74 Ptolemaios 2.

Ptolemaios is Celestial Being's (CB's) tactical mobile suit (MS) carrier. Like all CB-built units, it's reliant on GN Particles, however, it doesn't have its own GN Drive. It instead taps into a large internal particle storage tank that's periodically recharged by a Gundam's GN Drive. Because Ptolemy wasn't made to be a warship, it has no built-in weapons. While it may not be formidable in combat, it has its own defense systems and equipment to operate and survive in combat situations.

Externally, Ptolemy was built with a large rotatable peripheral docking ring. The ring itself has 4 docking ports. Each of the ports is docked with MS Containers that contains units GN-001 - GN 005. Ptolemy was designed to be compact and economic of its size, therefore the Gundams utilize only a single linear catapult (an MS launcher that uses magnets). The catapult's opening is on top of Ptolemy. Whenever a Gundam needs to sortie, the docking ring would rotate the specific Gundam on top and slide it down from the container to launch from the forward ship hatch.

Each of the MS Containers were designed with their own propulsion system, powered by GN particles. While docked, they help provide additional propulsion power and siphon GN particles from the Gundams to help recharge Ptolemy. A power connector in each of the docking bays allows Ptolemy to connect to the GN Drives within the Gundams to recharge. When all 4 Gundams are launched from the ship, the amount of energy available is severely limited. It's why at least one Gundam must periodically return or remain on standby to ensure particle reserves are optimal.

Defense-wise, Ptolemy's best defenses were its speed, stealth, and GN Field. Ptolemy was the fastest and most maneuverable ship of its time. The ship utilizes the MS Containers and two large GN Engines for propulsion and steering. Unlike the Gundams, Ptolemy wasn't built with an AMBAC system, and its own mass as a ship prevents it from being as mobile as a mobile suit.

As a benefit to the GN particles it vents throughout its hull, Ptolemy is invisible to all sensors. The particles would disrupt any nearby sensors and communications to quietly slip away from enemy detection. The only way to detect Ptolemy is through the use of wide-area sensor networks. Because the ship could only disrupt a limited area of space, a vast sensor network that was designed to notice blanks in movement patterns would clue off the enemy where Ptolemy is located. Even when intercepted, the enemy can only see Ptolemy in line-of-sight and can't get too close to Ptolemy or risk a series of electronic failures, especially communications. When forced into combat, Ptolemy can vent higher concentrations of particles to deploy its GN Field (relative to its particle reserves); however it's not an absolute defense as it can still suffer hull damage from close range enemy fire and beam attacks (relative to destructive yield). After enemy forces had figured out ways to counter the effects of GN particles, Sumeragi (commander of the ship) had Ptolemy enhanced with new offensive equipment: GN Arms and the Assault Container.

The Assault Container serve as an attack-oriented replacement of the containers normally utilized by the Ptolemy, it has various armaments such as missiles, beam guns, and its own GN Field. It also carries a GN Arms at the back and can store a Gundam like the normal containers. Additionally, it also act as a a self-contained miniature MS combat carrier capable of atmospheric re-entry and escape. Two were made and deployed during Operation Fallen Angels.

Internally, Ptolemy contains all the amenities of an advanced cruiser: a mess hall, living-quarters, conference room, observation decks, command bridge, sensors, medical bay, Veda terminal, Haros, and Karels. Due to long term missions, Ptolemy has quarters for the crew members to rest, a cafeteria for food, and a medical bay to treat injuries. For large scale debriefings, they have a large conference room to fit the entire staff with screens on all sides of the room to maximize visual displays and explanations over missions and plans. The command bridge also doubles as their CIC (Combat Information Center) for helm, system controls, and tactical advisement. Because their technology is tied closely to Veda, a terminal for their resident Innovade, Gundam Meister Tieria Erde, was installed for advanced network system applications. The ship is meant to support a large crew, but due to their lack of staff, maintenance bots like the Haros and Karels has been used to replace humans for 24/7 maintenance work. While overall an advanced ship, its lack of weaponry and its reliance on support units makes Ptolemy a vulnerable target.

The HRL launched its most expensive operation in an attempt to hunt down and capture a Gundam for research. E-Sensors were placed throughout their area of space in a wide sensor network in an attempt to detect Ptolemy. The HRL knew Celestial Being's mobile units depended on GN particles for electronic interference and used this advantage against them by intentionally detecting large areas of electrical interference to find their vector. Ptolemy was discovered by HRL forces and Ptolemy used the Gundams and their GN Field for defense. Exia and Dynames defended the ship as Kyrios and Virtue/Nadleeh wiped out HRL opposition. The ship barely survived its first encounter with minor hull damage.

After the formation of UN Forces, GN particle detection breakthroughs allowed them to hunt down Celestial Being. Ptolemy's GN particle stealth capabilities had become a liability and it couldn't effectively defend itself against the new enemy GN-X's. The maintenance drones and Haros on board the Ptolemy managed to keep the ship in working condition, but eventually their countermeasures were no longer effective.

In episode 24, the ship was defending itself against the United Nations Forces as Exia, Kyrios, and Nadleeh attempted to eliminate remaining opposition. With the destruction of Gundam Dynames, the crew had only two Assault Containers and GN Field for defense. Ptolemy and the Gundams held out against UN Forces effectively until the arrival of GNMA-XCVII Alvatore. The mobile armor damaged the port and starboard sides of the ship and limited the ship's movement. The ship was eventually destroyed when a GN-X managed to fly right in front of the ship and fired point blank into the bridge. The ship idled for a while and had electrical failure that resulted in a secondary explosion that incapacitated the ship.

It's unclear if Celestial Being managed to salvage Ptolemy and rebuild it, but hard lessons were learned from the final battle, resulting in the development of CBS-74 Ptolemaios 2. The variant was an overall improved version with it being a capable, self-reliant ship. 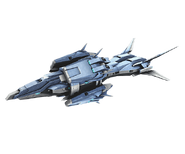 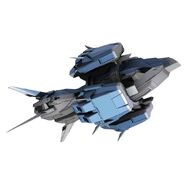