The CBNGN-003 Union Flag Celestial Being Version (aka Flag Kai) is a SVMS-01AP Union Flag Orbit Package Colony Guard Type upgraded with GN technology by Celestial Being. It is featured in the film Mobile Suit Gundam 00 The Movie: A wakening of the Trailblazer, and piloted by Setsuna F. Seiei.

With the advent of the GN-X series, most older mobile weapons had quickly fell into obsolescence. Over time, they began to find their way into the hands of third-party users and civilian contractors. After the battle with the Innovators, Celestial Being acquired some of these older generation mobile suits as they now preferred to maintain peace incognito. One such unit was a SVMS-01AP Union Flag Orbit Package Colony Guard Type.

The remodeled Flag is designed for high-speed melee combat. In order to maintain the goal of anonymity, most of its physical layout remains unchanged. It can still transform between a flight mode and MS mode to allow the pilot to adapt effectively to changing combat situations. It was not even modified to use a GN Drive or GN Condensers for power, a factor denoted by the 'NGN' (Non-GN) designation. It also lacks modern defenses to stand against particle-based weaponry. The Flag Kai depends heavily on its high-speed plasma thrusters and the skills of its pilot to overtake superior MS opponents in combat.

To close the gap with modern MS weaponry, the Flag Kai's offensive capabilities was upgraded. The standard linear rifle has been replaced by the GN Sword II Kai (a variant of the GN Sword II from GN-0000 00 Gundam) and its missiles have been replaced by large smoke bombs. The sword is fixed as the "nose" of the craft in flight mode, allowing it to dogfight via the pair of beam emitters mounted on the top and bottom sections of the blade. If necessary, the sword can be used as a ramming device. In MS mode, the sword is hand-carried, again alternating between sword and gun for melee combat or short-to-mid range shooting. The weapon utilizes a GN Condenser to store a limited amount of GN Particles for beam firing. The large smoke bombs are deployed to create a massive particle cloud to blind enemy sensors and allow the pilot to either flank the enemy position or to make a hasty retreat.

Other weapons include the Colony Guard Flag's plasma swords and linear cannons. Despite the general obsolescence of the Flag series, this particular unit would prove to be quite useful. In the hands of a Innovator Gundam Meister, it would prove more than a match for advanced units like the GN-XIII series.

Developed based on 00 Gundam's GN Sword II.[1] It is placed on the unit's forward section in flight mode much like the linear rifle of the original Flag. It can switch between sword mode and rifle mode, and can fire beams from two emitters, one on the top and one on the bottom. The weapon draws power from a built-in GN Condenser, and it can be used by any non-GN mobile suit.[1]

A pair of 120mm short linear cannons are attached to the mounts on the sides of the backpack.

A pair of linear cannons are mounted in the backpack and their barrels flank both sides of the head.

The Flag Kai features a plasma sword that generates plasma in a sword shape. It is different from the plasma swords of Union Flags in the sense that they do not have a vibroblade incorporated. It is speculated that the Plasma Sword's power output has been substantially improved since 2308, as it is able to cut a relatively advanced GN-XIII with ease.

The Flag Kai is shown to shoot smoke discharging pellets. The smoke is also mixed with GN Particles for added stealth and jamming abilities.

A small spike that extends out of the bottom of the circular part of each foot.

During an inspection of a colony construction facility, a space shuttle bearing Marina Ismail, Shirin Bakhtiar and other inspectors came under attack by three GNX-609T GN-XIIIs from the Colony Public Corporation, intending to silence them. Before their shuttle could be destroyed, Setsuna F. Seiei intervened with the Celestial Being version of the Union Flag. Using the modified Flag to conceal his affiliation with Celestial Being, Setsuna was nonetheless able to destroy the three GN-XIIIs, saving Marina and Shirin from danger. After that, Setsuna retreated from the scene, along with Lockon Stratos, who had infiltrated the shuttle and disarmed the terrorist with a non-fatal bullet wound, via the flight mode of the Flag Kai. After their mission was complete, the CB Flag returned to Ptolemy. The fate of the unit after remain unknown.

Setsuna F. Seiei in the cockpit 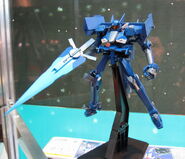