The CB-9696G/C/T Reversible Gundam is a Gunpla appearing in Gundam Build Fighters: Battlogue. It is built by Allan Adams based on the CB-0000G/C Reborns Gundam, and is piloted by a Ribbons Almark AI and later an Amuro Ray AI.

Created by Allan Adams, former PPSE Chief Engineer, the Reversible Gundam is an all-purpose machine with every kind of armament, and could also handle mid-range fire support and long-range sniping.[1] Due to its versatility, it is capable of adapting to any battle situation.[2]

Like its base Gunpla, the Reborns Gundam, the Reversible Gundam can transform between Gundam mode and Cannon mode, but it also has an additional Tank mode like the CB-0000G/C/T Reborns Gundam Origin, the Reborns Gundam's original design.[2][3] Using this feature as a clue, Allan also incorporated other original transformation gimmicks into the Gunpla.[3]

The Gundam mode is a very versatile human-like mode, while the Cannon mode is for mid-range combat and the versatility of the Gundam mode with the firepower of the Tank mode.[3] The Tank mode is mainly for long-range artillery bombardments, but also features large claw hands for melee combat in an improvement over the Reborns Gundam Origin’s Tank mode.[3] In addition, the Tank mode also has high-speed mobility due to the use of hover units.[3]

The same beam rifle as used by the Reborns Gundam, it is held in Gundam mode’s left hand.[1]

A pair of handguns that rapid fire weak but precise beam shots.[3] Attached to movable forearm mounts that also carry the GN Battle Shields. Primarily use by the Gundam mode.[1]

Attached to the forearms via movable mounts, it is the main defensive armament in Gundam mode and the blades in front can be used to grapple opponents.[1][3] In Cannon mode and Tank mode, the pair of GN Battle Shield transform into claw hands.[3]

A pair of large beam sabers that are stored in the backpack.[3] Available for use in all modes, but most often used by the Gundam mode.[3]

The Cannon mode’s three-fingered manipulators can shoot out as wired anchors, and are used to restrict opponent’s movements.[1][3]

A remote controlled weaponry, one is stored in each GN Buster Cannon.[3] The pair of GN Fin Fangs resemble the Reborn Gundam’s small GN Fin Fangs, and like the latter, are capable of firing beams and emitting short beam blades.[1]

Created by Allan Adams, the Reversible Gundam was used in a test of the battle system's newly implemented automatic control mode, which used quasi-personality AIs based on pilots from various Gundam works to pilot instead of a Gunpla Fighter. It was initially piloted by a Ribbons Almark AI, but when it was on the losing end against the Ballistic Zaku and a Char Aznable AI, Allan switched to an Amuro Ray AI and the match ended in a draw.[1] 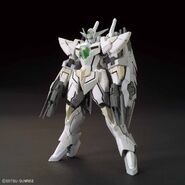 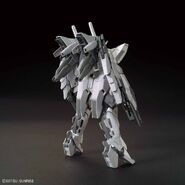 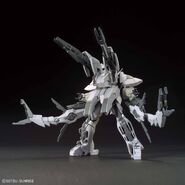 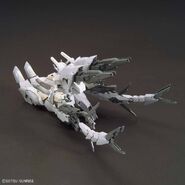 Retrieved from "https://gundam.fandom.com/wiki/CB-9696G/C/T_Reversible_Gundam?oldid=466398"
Community content is available under CC-BY-SA unless otherwise noted.