The CB-002 Raphael Gundam (aka Raphael Gundam, Raphael) is the successor of the GN-008GNHW/B Seravee Gundam GNHW/B introdiced in Mobile Suit Gundam 00 The Movie -A wakening of the Trailblazer-. It is piloted by Tieria Erde.

Raphael is classified as a 5th Generation Gundam[1] and is the product of compiled Innovators and Celestial Being MS technology. It was produced by Veda and Gundam Meister Tieria Erde for the latter's own personal use within Celestial Being's MS factory.[2] Technical and combat data from GNZ-003 Gadessa series and GN-008GNHW/B Seravee Gundam GNHW/B were used as its basis,[3][4] resulting in a hybrid heavy assault unit. The Raphael Gundam is overall different than its predecessors.

Raphael is a departure from its predecessors as it is the first heavy assault Gundam without heavy body armor. Its overall presentation has been inverted from its lineage, as all Gundams previously piloted by Tieria Erde had the primary combat unit as a heavily armored assault unit, with a hidden second high-mobility unit as a final countermeasure. This inversion allows Raphael greater mobility and flexibility in combat; it reduces its defensive capabilities as a result, both being more so than Raphael's predecessors, the GN-008 Seravee Gundam and GN-005 Gundam Virtue.

The Raphael's overall appearance carries aesthetic design elements from both the GNZ series and the GN-008 Seravee Gundam. The mobile suit frame was built from the Innovators' leftover Gadessa components and salvaged parts from the Seravee. Like its predecessor, Raphael's backpack contains a hidden second Gundam. The true form of the Raphael's backpack is actually the GN-008RE Seravee Gundam II, a redeveloped variant of the Seravee Gundam. Unlike the GN-009 Seraphim Gundam (which was directly piloted by Tieria when deployed), the Seravee II is an unmanned combat unit which receives commands from Tieria's quantum brainwaves.

The cockpit of Raphael is also derived from the GNZ series, but the original escape pod and its emergency ejection system were omitted during its completion. The omission of the escape pod used on the GNZ series of mobile suits is to make room to fit Seravee II, although this meant that Tieria had no means of escape if either mobile suit were compromised in battle. Tieria felt it was unnecessary as his consciousness could be stored within Veda if his Innovade body was destroyed. Currently, it is unclear if the suit has Trial System.

Like its predecessors, the Raphael is a high-particle-consuming moblie suit. A significant difference is that Raphael is the only Gundam in Celestial Being's possession that does not possess a true GN Drive. Instead, Raphael draws power from three GN Drive Taus. All three of these GN Drive Taus are located in Seravee II (one in both GN Big Cannons each and one in the main body). As the Seravee II is equipped with 3 Tau Drives, the Seravee II rivals the power of original generation 3.5 Gundam units equipped with true drives as exemplified by its ability to support the GN Big Cannon.[1] Once Raphael separates from the Seravee II, it is powered by its own particle reserves.

A weakness of the Raphael is that its shape and weight distribution makes it less effective and harder to use under gravitational environments[5] like Earth. Thus for combat on Earth and within gravitational environments, the CB-002/GD Raphael Gundam Dominions was made. In this variant of the Raphael, the Seravee II on the back is re-purposed into armor parts instead.[5]

The attached GN Drive Taus give the remote cannons great speed and power, as well as giving them greater operating time by acting as the cannons' own dedicated power source. When greater firepower is needed, Raphael can also detach its backpack-mounted GN Bazookas for more firepower. However, in an unusual engineering decision, Raphael isn't capable of creating bazooka/cannon combinations like the original Seravee. The GN Bazookas originally had a hollowed bottom, allowing both ends of the bazookas to connect and form more varying kinds of blasts to adapt and apply for different combat situations. Unfortunately, no reasons are given for this alternation.

Overall, the Raphael is a formidable unit of great firepower, but limited in combat time as it no longer contains its Gundam predecessors' perpetual energy system, an original GN Drive. Although using the inferior GN Drive Tau in place of an original GN Drive, the Raphael is still able to match CB's other Gundams in terms of combat performance for a limited time. Its overall systems can be enhanced with the Trans-Am System. As a final measure, Raphael can self-destruct by overloading its Trans-Am, taking nearby enemy units down with it.

A pair of GN Bazookas are attached to the backpack of the Raphael Gundam. They are derived from the Seravee's GN Bazooka II and can be adjusted for rapid fire or for high power shots.[6]

Raphael's GN Beam Rifle is similar in design to the rifles used by the Nadleeh. It is based on the design of Nadleeh's GN Beam Rifle and was improved with updated crystal sensors.[1] Its exact power rating is unknown, although the power output and size of the beam appears to be less than that of Raphael's GN Big Cannons.

On Raphael's backpack, the unit contains a pair of GN Claws with built-in cannons. They're enhanced versions of Virtue's and Seravee's GN Cannons and each GN Big Cannon is much powerful than their predecessors. The GN Big Cannons are hidden underneath the claws. Differing from its lineage though, the cannons have their own GN Drive Tau and are detachable, capable of autonomous movement that gives them an unrestricted field of fire and a greater range of movement. This is likely the most particle-consuming weapon on Raphael, capable of depleting a large number of particles with only one shot.

The GN Claw was designed to intercept and/or anticipate a target before Raphael could. The claws were designed to grab enemy units and can tear the target apart, crush it, or remove it from the combat zone. The tip of all the claws can each generate a GN Beam Saber.[1]

A wakening of the Trailblazer 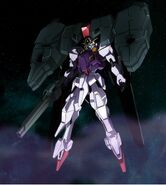 Being assimilated while in Trans-Am 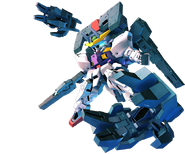 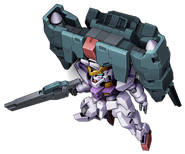 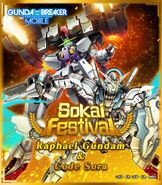 As seen in Gundam Breaker Mobile