Developed by Veda as a successor of the GN-000 0 Gundam, the 1 Gundam is developed simultaneously with the CBY-077 GN Cannon for use in armed interventions conducted by Innovades.[1][2][3] This is a competing proposal to the use of humans as Gundam Meisters.[1][2] Developments of Innovade-use machines are conducted in the spaceship, Celestial Being, independent from the Gundams used by human meisters.[1][2] Unlike the human use Gundams that have their own specializations, Innovade-use machines are designed with the concept of having a versatile Gundam-type unit operating alongside several support-use units.[2][4]

This versatile Gundam-type unit is the 1 Gundam, whose basic data is derived from the data of the human use Gundams that Ruido Resonance and friends are involved in developing.[1][2] The suit’s name is a continuation of the naming convention of its predecessor, the 0 Gundam, where the number ‘0’ in the name is read as the alphabet ‘O’, thus the number ‘1’ in the 1 Gundam’s name is read as the alphabet ‘I’.[1][3][5] The suit’s arms have large GN Condensers for supplying its GN Beam Rifle and GN Beam Sabers with a large amount of GN particles, giving the machine strong combat power.[2][6] It can also use a GN Shield for defense.[3][7] For special missions, the 1 Gundam’s armaments can be changed and it will be accompanied by various support machines such as the GN Cannon.[3][6]

Like the GN-001 Gundam Exia and other 3rd generation Gundams, the 1 Gundam has optical camouflage and uses the same thruster-equipped cone cover for its GN Drive.[1][4][6] Veda eventually drops the Innovade plan, but an Innovade known as Beside Pain produces and deploys a 1 Gundam and two GN Cannons to sabotage the recruitment of human meisters in 2302 AD.[1][8] The 1 Gundam’s data is subsequently utilize to develop the GNMS-XCVII Alvaaron and GNMA-XCVII Alvatore deployed in 2308 AD.[9][10] Later, its data is also utilized in the development of Ribbons Almark’s CB-0000G/C/T Reborns Gundam Origin, the original configuration of the CB-0000G/C Reborns Gundam.[10]

Another 1 Gundam is discovered in 2312 AD, and although it retains the GN Drive’s cone thruster cover, it is driven by a GN Drive Tau and can use that drive’s recharging facility.[11][12] This 1 Gundam is left behind by Beside Pain to allow his revival in an Innovade's body made from the same DNA base sequence as his, and contains a copy of his memories.[7] It is eventually upgraded into the CB-001.5 1.5 Gundam.[3][13] According to Beside Pain, Ribbons also has a 1 Gundam in his possession.[14]

The 1 Gundam’s primary firearm, it shoots beams made of GN Particles. The GN Beam Rifle resembles the Reborns Gundam’s GN Buster Rifle, but does not have the under arm connector.[6] Instead, it draws GN Particles from the large GN Condenser on the arm via the connector at the back that plugs into the forearm socket.[2][6]

Mounted on the left forearm, it is made of E-Carbon and a GN Field can be deployed on its surface.[3][5] 1 Gundam’s GN Shield has a similar form as the Gundam Exia’s, but is larger.[3]

Like Gundam Exia and other 3rd generation Gundams used by the human meisters, 1 Gundam has an optical camouflage system that when activated renders it invisible to the naked eye, and undetectable by radar or other similar sensors.[1]

In 2312 AD, the GN Drive Tau-powered 1 Gundam displays the ability to use the 0 Gundam’s signature GN Feathers.[4][5] The 1 Gundam’s GN Feathers can augment the defensive ability of its GN Shield, blocking a shot fired by the Memento Mori.[5] However, doing this severely depletes the particle reserves of the GN Drive Tau.[5]

The operating system of the 1 Gundam is linked to Veda, allowing the super computer to provide support to the Gundam and its pilots.

For more information on the 1 Gundam's history, please go to Beside Pain's and Leif Recitativo's pages. 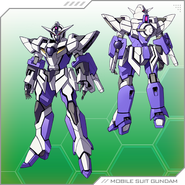 Imaginary scenario of 1 Gundams and GN Cannons in combat 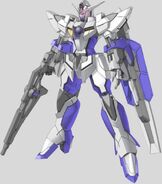 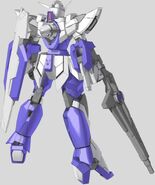 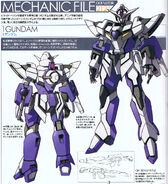