After the 1 Gundam was badly damaged by ex-Fereshte Gundam Meister Fon Spaak's GNY-001F Gundam Astraea Type F, Beside Pain brought it to a secret factory within an orbital elevator that was one of the places Alejandro Corner used to assemble the GNX-603T GN-X.[1][2][3][4] There, he repaired and upgraded the 1 Gundam into the 1.5 Gundam.[1][2][3][4] It is named based on all its abilities being 1.5 times that of the 1 Gundam's.[4][5][6] Its aerial combat capabilities are described by Beside Pain to be much higher the Astraea Type F's.[4]

The main distinguishing feature of the 1.5 Gundam is the two new binders on its back, which can be used to enhance the suit's offensive power, defensive power and mobility.[1][4][5][6] The binders are also armed with Binder Rifles and can function as a powerful beam cannon known as Alvaaron Cannon.[1][5] The 1.5 Gundam retains the armaments of the 1 Gundam, but uses a GN Buster Rifle instead of a GN Beam Rifle.[1][5][6]

A handheld rifle capable of firing a powerful particle beam, it is of the same model as used by the CB-0000G/C Reborns Gundam.[1][7] It draws GN Particles from the large GN Condenser on the arm via an under arm connector.

A close range melee weapon that emits a beam blade made of compressed GN Particles when drawn.[1][7][8] Normally, it is stored on both forearms, but when the GN Shield is equipped, one of the GN Beam Sabers is moved to the underside of the GN Shield.[1][9]

A shield made of E-Carbon that can generate a GN Field on its surface.[1][7] Its shape is similar to that of GN-001 Gundam Exia's GN Shield, but is much larger in size.[1] When carried on the forearm, it stores one of the 1.5 Gundam's GN Beam Saber on the underside.[1][9]

The Binder Rifles are beam rifles installed in the bottom of the back-mounted binders for ground attack-use.[1] The binders are positioned under the shoulders when using these rifles.[1][5]

A high output beam cannon that is formed when the back-mounted binders are deployed over the shoulders.[1][2][8][9] A field is created between the inner surfaces of the binders, concentrating a huge amount of GN Particles rapidly and compresses them into an energy sphere before firing them as a giant destructive beam.[1][2][8] This is similar to the GNMS-XCVII Alvaaron's wing-mounted large particle beam cannon, and is in fact developed using design data from that system.[1][2][8] Since the Alvaaron Cannon consumes a huge amount of GN Particles, the 1.5 Gundam, which only has a limited particle reserve due to being driven by a GN Drive Tau, can only fire it once per sortie without any issues.[1][8] Firing a second time would deplete its particles reserve to a critical level.[4][8]

The same large solid sword as used by the GNX-607T/AC GN-XII Sword, it is used by a 1.5 Gundam appearing in Gundam EXA. A GN Field can be generated on the GN Buster Sword's surface, this not only grant the weapon high cutting capabilities, but also allows it to be used as a shield.

Like the 1 Gundam, the 1.5 Gundam has an optical camouflage system that when activated renders it invisible to the naked eye, and undetectable by radar or other similar sensors

Mounted on the back, the pair of movable binders are directly connected to the 1.5 Gundam's GN Drive Tau and are designed using data from Alvaaron.[1][2][8] Besides being used for attitude control, they also serve to enhance the suit's offensive and defensive power as well as mobility with their high particle control capabilities.[1][5][6][10] This multipurpose equipment is thus a critical part of the 1.5 Gundam.[1][10]

The operating system of the 1.5 Gundam is linked to Veda, allowing the super computer to provide support to the Gundam and its pilot.

Beside Pain repaired and upgraded his damaged CB-001 1 Gundam into the 1.5 Gundam in a concealed factory within the orbital elevator after escaping from Fon Spaak's GNY-001F Gundam Astraea Type F. During 1.5 Gundam's maiden flight, it encountered three GNX-609T GN-XIIIs and quickly destroyed them with its Alvaaron Cannon. Hixar Fermi, piloting the GN-XXX Gundam Rasiel, then arrived to challenge Beside, who welcomed the fight as a way of testing 1.5 Gundam's capabilities.

Back when the 1 Gundam when was still being upgraded into the 1.5 Gundam, Beside Pain imagined three Innovades piloting the 1.5 Gundams, battling Ribbons Almark's GNZ series of mobile suits. Although he had worked under Ribbons in the past, helping with the development of the GNX-603T GN-X, his views on conducting Aeolia Schenberg's plan was vastly different from Ribbons'. He preferred Innovades piloting the Gundams for armed interventions, and till now had no given up on that idea. Therefore, he desired to defeat Ribbons and be the custodian of Aeolia's plan.

Beside regarded the 1.5 Gundam as being superior to all GN Drive (original and Tau version) equipped mobile suits. In his fantasy, one of the 1.5 Gundams fired its Alvaaron Cannon, vaporizing multiple enemy units in an instant. A second 1.5 Gundam engaged in close combat with the closing in GNZ-007 Gaddess, using the Defence Mode to block the enemy's GN Heat Saber, which broke as it hit the GN Shield's enhanced GN Field. The last 1.5 Gundam used the Attack Mode to shoot at other enemy units. As he fantasized, he proudly declared that the 1.5 Gundam was invincible.

The fight between Beside's 1.5 Gundam and Hixar's Gundam Rasiel began with Hixar firing the Rasiel's GN Beam Rifle, but the 1.5 Gundam easily evaded the shot using Flight Mode. Beside counterattacked by firing the 1.5 Gundam's Alvaaron Cannon, which the Rasiel barely dodged, with its right side badly damaged by the passing huge beam. The Rasiel then crashed onto the ground due to problems with its particle control functions, and the 1.5 Gundam slowly landed in front of it. Beside calmly noted that his use of the Alvaaron Cannon had depleted the 1.5 Gundam's particle reserve to a critical level. He was not saying this for Hixar's benefit, but merely noting an observation in his performance test of the 1.5 Gundam.

Beside then provoked Hixar by asking if his Rasiel could still stand up, as he wanted to test other 1.5 Gundam's functions. In response, Hixar's Rasiel rose up and drew its GN Beam Saber. Beside Pain welcomed the switch to close combat and 1.5 Gundam deployed the Defence Mode. The moment that Rasiel's GN Beam Saber strike the enhanced GN Field on 1.5 Gundam's GN Shield, its beam blade quickly collapsed and dealt no damage at all. Seeing this, Beside commented that Hixar's GN Beam Saber was too weak to cause any damage. However, Hixar refused to give up and strike again. Bored by the repetitive attack, Beside drew the 1.5 Gundam's GN Beam Saber and brought it down on Rasiel.

Beside and his 1.5 Gundam defeated Hixar's Rasiel and left. Recharging the 1.5 Gundam at an ESF base he assaulted, Beside was concerned with how to regain the body of Leif Recitativo as he wanted to be a member of the six comrades. Thinking that the recovered Leif would visit Telicyra Herfi, Beside headed to Telicyra's mansion in 1.5 Gundam, unaware that both Leif and Telicyra were in space. After firing warning shots with the GN Buster Rifle, Beside landed the 1.5 Gundam and demanded Leif and Telicyra to come out and meet him.

When told by Bryn Sondheim that the two were out, Beside decided to destroy the mansion and kill those within to lure the two to meet him. As the 1.5 Gundam aimed its GN Buster Rifle, Lars Grise arrived. Using his power of remote controlling machine via Veda's quantum communication network, Lars took control of the 1.5 Gundam, threatening to forced it to stab itself in the cockpit using its own GN Beam Saber if Beside did not leave immediately. With no choice, Beside gave up and left.

While Beside was pleased by Hixar's supposed death, a GNR-000 GN Sefer carrying Hixar and Hayana crashed into the 1.5 Gundam. Hixar then leapt over to the 1.5 Gundam, opened its cockpit door and killed Beside with two shots to his head. Later, Hermiya used her power as one of the six comrades to remove the treacherous Regene from the roster, and also erased his memories of the related events. Additionally, due to Beside's earlier attacks, the orbital elevator was destabilized and the outer walls of its lower section were in the process of being purged to prevent a full collapse. To gain more time for the evacuation of citizens in the city at the elevator's base, Lars volunteered to remain on the elevator and used his power to help restore the elevator's balance. Even so, Fon remarked that the calculations involved would be too complicated and nearly impossible. Leif then decided to pilot the 1.5 Gundam to help Lars.

After receiving GN Particle resupply from the GN Sefer, Leif and the 1.5 Gundam headed to the stabilizer section of the elevator and released a large amount of GN particles, using their mass manipulation ability to compensate for the two destroyed stabilizers. With Leif's help, the elevator slowly regained its balance, but the 1.5 Gundam's GN Particles reserve was being depleted at a rapid rate. Suddenly, Beside Pain's backup data in the 1.5 Gundam uploaded into Leif, taking over his body and reviving Beside. Beside maneuvered the 1.5 Gundam away and resumed his plan to kill members of the six comrades. However, Fon and his GNY-001F/hs-A01D Gundam Avalanche Astraea Type F' appeared and fought Beside.

The 1.5 Gundam used the Defence Mode to block the four GN Beam Sabers of the Avalanche Astraea Type F', before switching to Attack Mode and destroying the Avalanche Dash equipment, but the Astraea Type F escaped unharmed. The two Gundams then engaged in a GN Beam Saber duel, with Fon's Astraea Type F gaining the upper hand, slicing off the 1.5 Gundam's GN Shield and right binder. 1.5 Gundam continued to take a beating when Fon switched to the GN Hammer, and lost its left binder. Bryn then sensed a weak signal from Leif's quantum brainwaves within Beside. Hixar theorized that Fon allowed Leif to pilot the 1.5 Gundam knowing of the danger that Beside would be revived; Fon had wanted Leif to defeat Beside himself, and was piloting the Astraea Type F in case of Leif's failure. Believing in Hixar's theory, Telicyra called out to Leif's consciousness to stop Beside.

The 1.5 Gundam then stop fighting as Leif's consciousness battled with Beside's over the control of their shared body. Leif eventually won and removed Beside's consciousness from the body. Immediately after, an ESF mobile suit team led by Hiling Care in her GNZ-003 Gadessa appeared. Hiling stated that her team was not here to fight, but in exchange, Leif must hand over the 1.5 Gundam. Leif was puzzled, but Fon urged him to do as told, as he had no use for the Gundam anyway. Fon also speculated that Hiling's master was after Beside's character data in the 1.5 Gundam. Hiling did not deny what Fon said, but gave her assurance they would not allow Beside to be revived again. With that, Leif gave them the 1.5 Gundam.

Leos Alloy used a 1.5 Gundam during his mission in the world of Anno Domini, which was mentioned as belonging to Ribbons Almark (this unit was likely the same 1.5 Gundam that Leif handed over to Hiling). In addition to 1.5 Gundam's standard armaments, Leos also used a GN buster sword taken from a GNX-607T/AC GN-XII Sword, and battled Fon's GNY-001F Gundam Astraea Type F. 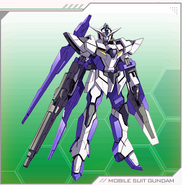 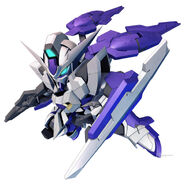 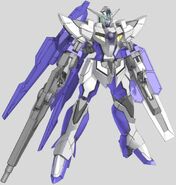