The Hyperion G is the ground combat variant of the cancelled CAT1-X Hyperion series, with twelve trial units manufactured for possible mass production. It was produced by Actaeon Industries in order to improve their sales result and is largely similar to the original Hyperion except that the front skirt armors have been shortened, the head's V-fin has been removed and the main sensor system has been replaced by a goggle-type. To reduce the suit's energy consumption, it only has one Lightwave shield emitter mounted in the right binder at the back, while the left binder has been replaced with a GAU-8M2 52mm machine gun. Other armaments of the Hyperion G include head-mounted CIWS, beam knives, beam cannon, beam submachine gun and a shield. Other than the shield, all of these are the same as those used by the original Hyperion.

Like most other mobile suits, the Hyperion G features two head-mounted multi-barrel CIWS guns to shoot down incoming missiles or enemies at close range.

For close combat, the Hyperion G features five RBW Type 7001 "Romteknica" beam knives. One is stored on each limb and one on the sub-machine gun. The knives are powered by their own independent batteries, drawing no power from the suit's battery and can thus be also used as throwing weapons.

The main ranged combat weapon of the suit is the "Zastava Stigmate" beam sub-machine gun. The beam sub-machine gun's battery is stored in a "clip" that can be quickly and easily replaced, and while its shots are weaker than those of standard beam rifles, its rate of fire is much greater. The sub-machine gun also mounts a "Romteknica" beam knife below the sensor, allowing the suit to engage in close combat quickly without changing weapons. The beam knife can also be ejected to hit incoming enemy units.

The strongest weapon of the Hyperion G is its "Forfanterie" beam cannon, which is mounted in the right backpack binder, below the lightwave barrier emitter. This cannon folds over the shoulder when in use and is powered by its own battery, which is ejected after each shot.

The same machine gun as used by GAT-01A1 Dagger and GAT-333 Raider Full Spec, except that it is fixed to the backpack, where the left binder of the original Hyperion is. The machine gun allows Hyperion G to attack enemy units at the back without turning and is often rotated to the front when in use.

Unlike the Hyperion, Hyperion G only has one lightwave shield emitter and it is mounted in the right backpack binder, which flips over the shoulder when the system is in use. As such, it can only generate a single plane of triangular beam shield in the frontal direction. However, Hyperion G can still attack through the shield, including throwing its beam knife and the beam emitted by the system can still take on other shapes and be used as an offensive weapon that is capable of penetrating other lightwave barriers, positron barriers and beam shields.

The same shield as used by the Dagger series, it provides additional defense and ensures that Hyperion G still has some kind of protection in the event the lightwave shield is penetrated.

During the First Alliance-PLANT War, the Eurasian Federation cooperated with Actaeon Industries to build three unique mobile suits, which were known as the Hyperion series. Eventually, a trial-type ground combat variant of this suit was developed by the Actaeon Industries, with at least twelve known units built, as evidenced by the "12" at the end of the suit's model code. This suit is called the Hyperion G and is quite similar to the original except for changes to its head, front skirts and weaponry. 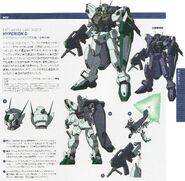