The CAMS-05 Mack Knife is a mobile suit featured in the Gundam Reconguista in G anime series.

The CAMS-05 Mack Knife is a new Capital Army variable mobile suit model developed for space combat.[1] Although its transformation system and built-in weapons are similar to the CAMS-03 Elf Bullock, the overall height of the body has been downsized to 16 meters.[2] Its transformation system is intended to reduce the chance of being struck by reducing the projected surface area, allowing the Mack Knife to evade enemy fire while in Flight mode and using melee combat in MS mode to bring down enemy MS.[2] While it possesses high maneuverability and firepower, the Mack Knife requires skill to pilot.[2] A dedicated large booster can be mounted on the back for long-distance travel.[2]

A built-in missile equipped with the specialized "Photon Eye" AI. It has high accuracy even under the influence of scattered Minovsky Particles.[2] 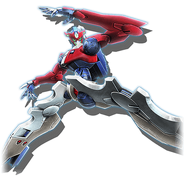 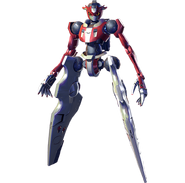 Mack Knife as seen on Gundam Versus 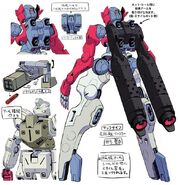 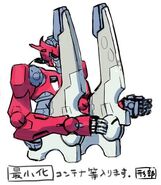 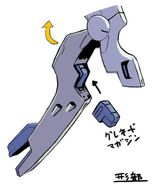 Retrieved from "https://gundam.fandom.com/wiki/CAMS-05_Mack_Knife?oldid=459067"
Community content is available under CC-BY-SA unless otherwise noted.